So it's been a busy week! After hanging out in Belgrade for a few days, much of which was spent in Gustav's pub, a very laid back bar run by Marco (who somehow also has the time to study Geography at the University), we had a nice and chilled out last evening. After recovering from the madness of 8% beer that tastes like lemonade, we headed off in the evening for a short (~10km) paddle to a beach well outside the city limits. At this stage the beaches were very few and far between and were mostly only there because people who wanted a beach had come along and cleared a patch in the densely forested shore. Luckily the weather had improved and we had a few beautiful days. No rain, not too hot, a nice breeze...perfect, but still after nearly 2months of paddling, that had taken us from Ulm the ~1400km down to Belgrade, it was hard to get motivated. We knew we needed a shortcut because otherwise the remaining ~1200km to the Black Sea would take over a month and we'd be into Winter so we started asking around to see could we hitch a lift on a barge. Our first tips were for a ship refuelling station outside Belgrade, but this turned out to be mostly disused and well rested after our stay in the city and not wanting to waste time, we headed off knowing that in 3 days we would make it to the last major port in Serbia, Velico Gradista, where we new all the ships going downriver would have to stop to complete customs.
The trip there took us through one of the widest and wildest parts of the Danube, where its over 3km wide as is famous for the wind. The wind that day was crazy, blowing mostly into our faces and with the river being so wide, made the stretch very choppy. This lasted around 5km and when we managed a tricky landing among real breaking waves onto the rocky beach at Ram, we had earned a break. Luckily after some good food, coffee, (which somehow I've developed a taste for on this trip!) and Turkish delight we were fully restored and ready for the next 18km stretch, which would take us to Velico Gradista. Before we left, we made the quick hike up to the old Turkish fortress that gave a stunning view over the river. It was only ever at times like that, looking down on the river from above, that we actually thought what we were doing was crazy! Once we were in Knu, it always just felt right. We headed back out through the waves and after a few hundred metres, the river wound around, meaning we were directly downwind of a serious gale! Out came the sail and we sat back comfortably, enjoying the sun and the scenery as the wind sped us over the next 15km, where it finally died off and the paddles came out again for the final stretch. After the two months this really felt like the finish line for me and as we came out from this notorious stretch of river and into the harbour, a group of astonished barge workers cheered us on for the final stretch. As we tied up Knu at the dock, neither of us could stop smiling. It was an incredible end to an incredible journey. Now it was time to try something new.

We tied up Knu and rambled up the pier to see if any of the multitude of barges had signs of life and if we could chance our way into hitching a ride. The first person we asked happened to be an agent who liased between the ships and the port authorities and took us straight under his wing, saying it should be no problem! The first captain he asked said he'd be pushing 2 barges full of engine fuel, so we all agreed it was not the best place for tourists. Just then another barge arrived on its route from Regensburg (Germany) to Ruse (Bulgaria) and was Captained by a friend of the agent. It wasn't carrying a dangerous cargo (mostly tractors) and had no problem bringing us along for the ride! It had taken us less than 20mins to hitch a barge!! We just had to hang on a few hours until they cleared customs, so typical of our luck so far, we went over and watched some short movies at the free film festival that was on for the evening! Since obviously we shouldnt officially be on the barge, we loaded Knu from the water a little away from view of the dock, and off we went. Getting on board from a canoe might sound like a big problem, but luckily they had a human forklift by the name of Siele, who pucked Andrea out with one arm! I passed out all our gear, got hauled up by Siele, closely followed Knu, and in less than 5 mins we were all safely onboard. The crew consisted of Captain Ogi, Ships Engineer and human forklift Siele, and another crew member, who after more than 40years on boats of new a bit of everything, was known mostly as Onkel (Unkle). We spent 3 nights on board getting spoiled rotten in suprisingly luxurious surroundings. There was a full kitchen, which they made full use of, and a big cosy couch for us in the spacious sitting room. After 2months in a tent, sitting on the couch getting served delicous food and drink it felt like we'd landed in a luxury cruiser! Amazingly, their generosity didn't end there. After swapping stories and filling them in on our prospective plans, they said that if we'd had enough of paddling they would bring back Knu back to Regensburg with them no problem, where we can have someone meet them to collect it. These guys saved us a small fortune by looking after us, not to mention all the fun we had! It's impossible to thank them enough.

And now we're in Ruse, after travelling over 2000km down the Danube, we've parted ways with the river and are now making new plans of how to get to the Black Sea. Obviously after a trip like that just getting a bus the ~200km to Varna just wont cut it, so we're going to spend some time getting there, by a mixture of hitch hiking (cars this time!) and hiking through some of the beautiful national parks that start just south of the city. We didn't quite make it around the world in our canoe, but it was all we ever hoped for. It was a good start.
Colin & Andrea
: ) 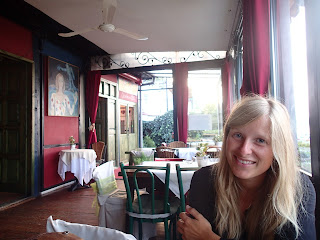 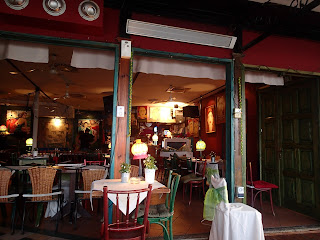 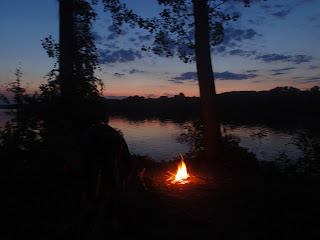 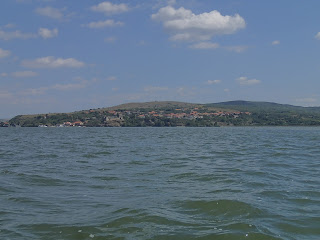 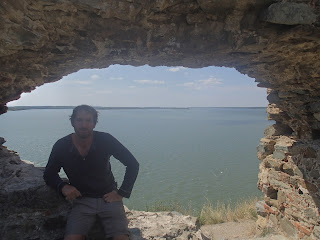 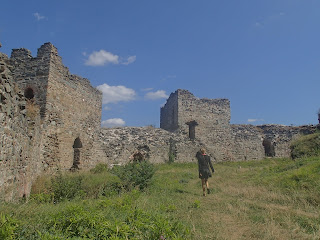 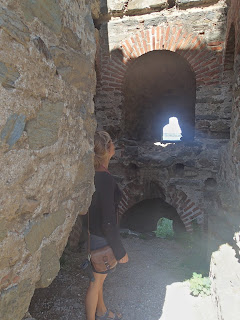 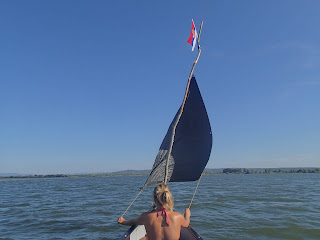 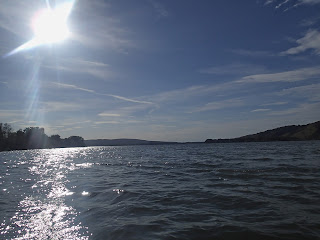 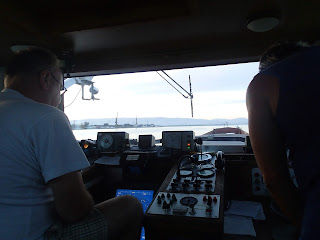 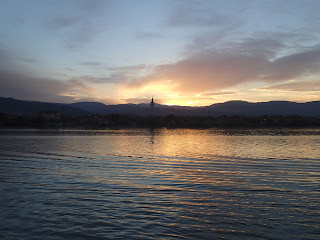 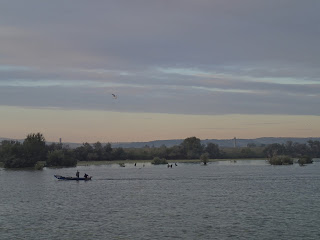 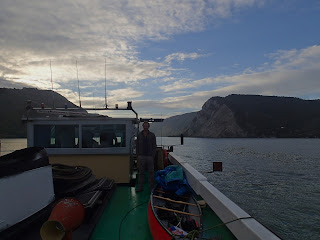 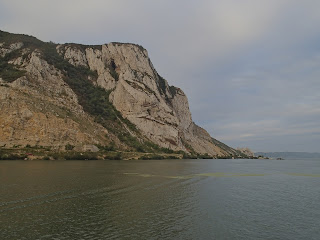 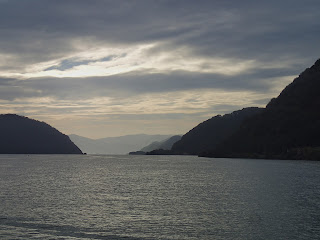 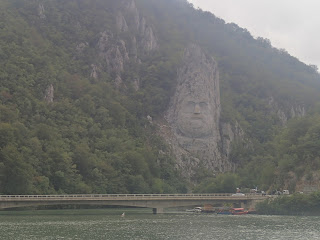 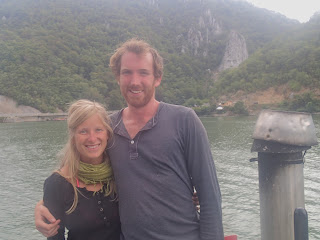 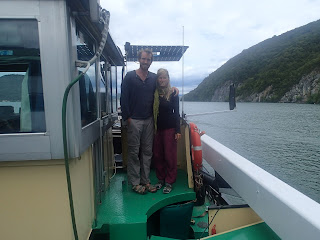 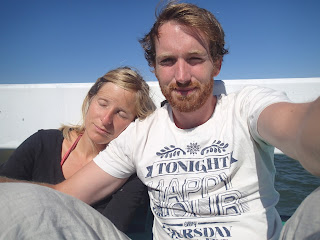 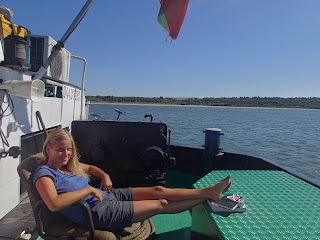 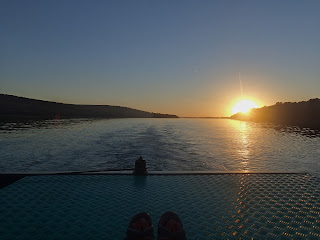 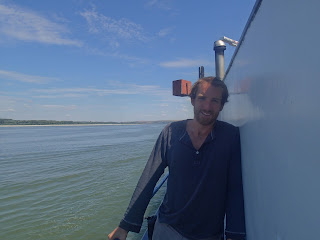