Rajasthan. Into the Desert.

After a great Christmas in Delhi we decided it was time for something completely different and so we said our goodbyes and jumped on a train into Rajasthan to ring in the New Year on a camel safari in the Thar desert. The most popular place for this is in the western region near Jaiselmer, but since we had heard awful reports it being very overcrowded we opted for a quieter spot on the eastern side of the desert near Bikaner. Aside from its fortress, something common to every city in Rajasthan, Bikaner is probably most well known for the Deshnok temple, which houses and cares for hundreds, if not thousands of rats. This isn't something we would have gone too far out of our way to see but since we were in the area, we decided to take a peak. After being to more than one Indian train station, we were well used to the site of rats clambering over eachother, although the fact that people were worshipping the rats did increase the novelty a little. Although it's supposedly good luck to have the rats run over your feet, we were happy enough keeping a respectful distance and leave them enjoy their food.

Click on any of the photos to enlarge them

After surviving our trip to the rat temple we decided we were ready to take on some camels and so off we went on a 2 day camel safari, spending New Year's Eve in the desert. When we signed up for the safari, we assumed their would be some amount of roughing it in the desert. We were completely wrong. We'd somehow gotten a 5star tour where everything from preparing and cooking the delicious meals and setting up the tents was all done for us. In the evening, we had 3 local musicians serenade us before we had our dinner and rang in the New Year with some Indian bubbly and some grapes, which a Spanish couple had brought all the way from Spain! I had know idea about this before but we soon found out that the Spanish ring in the New Year by eating a grape for each of the last 12 seconds of the old year. So with grapes, bubbly and lots of great food in our stomachs we went off to bed, reflecting happily on a great year :) 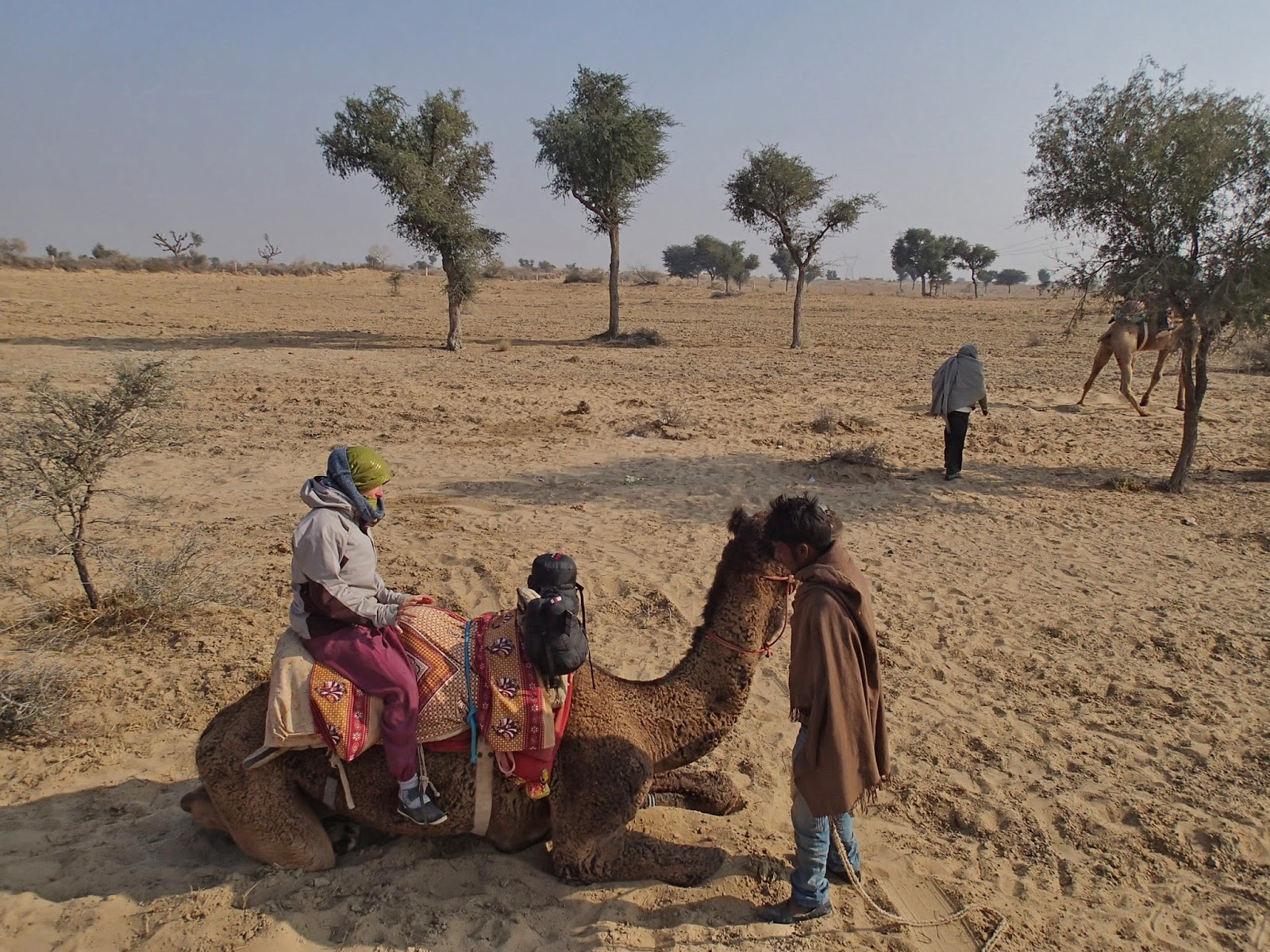 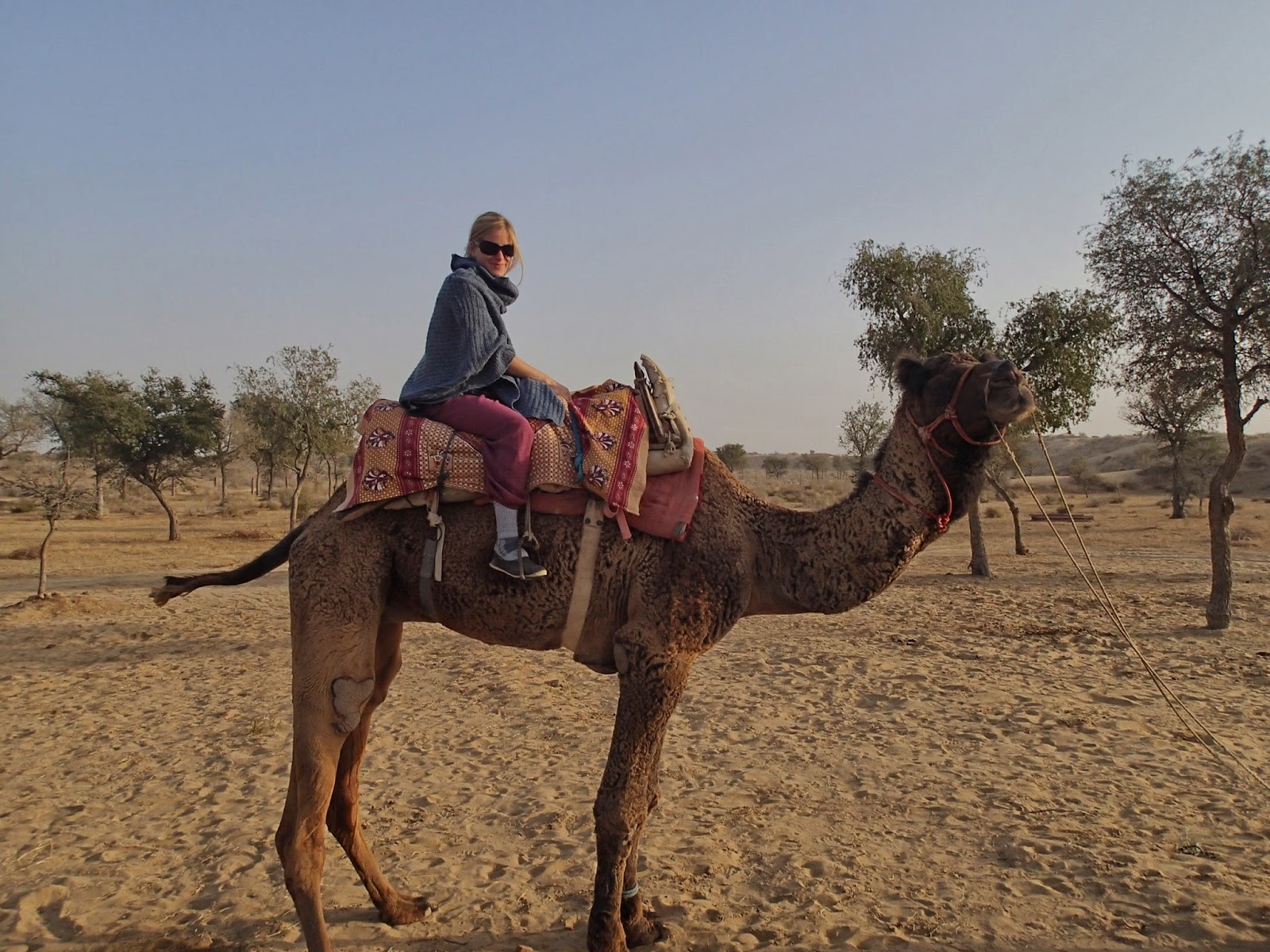 From Bikaner we took the train to our next stop, Jaiselmer, which is at the far west fringe of the of Indian part of the Thar desert, bordering Pakistan. We had heard a lot about Jaiselmer but nothing prepares you for the incredible sight of this citadel rising precipitously from the endless flat arid land around it. Jaiselemer distinguishes itself from the other Rajasthani forts since it still has a permanent population of around 2000 people, aswell as the hordes of tourists that come here during the period of cooler weather around Christmas. We decided to stay outside of the fort, so we could enjoy the views of the fort better in the evening. 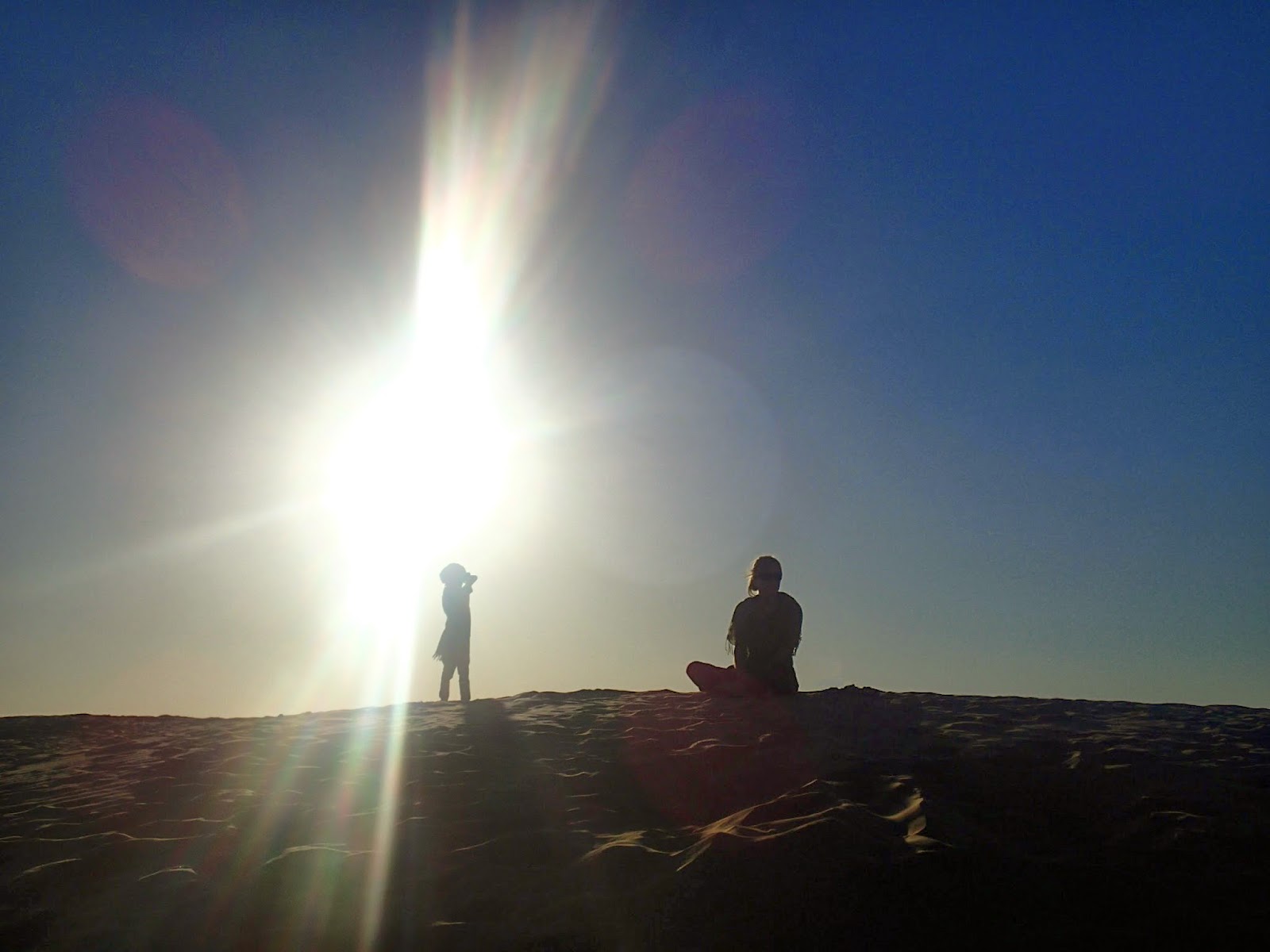 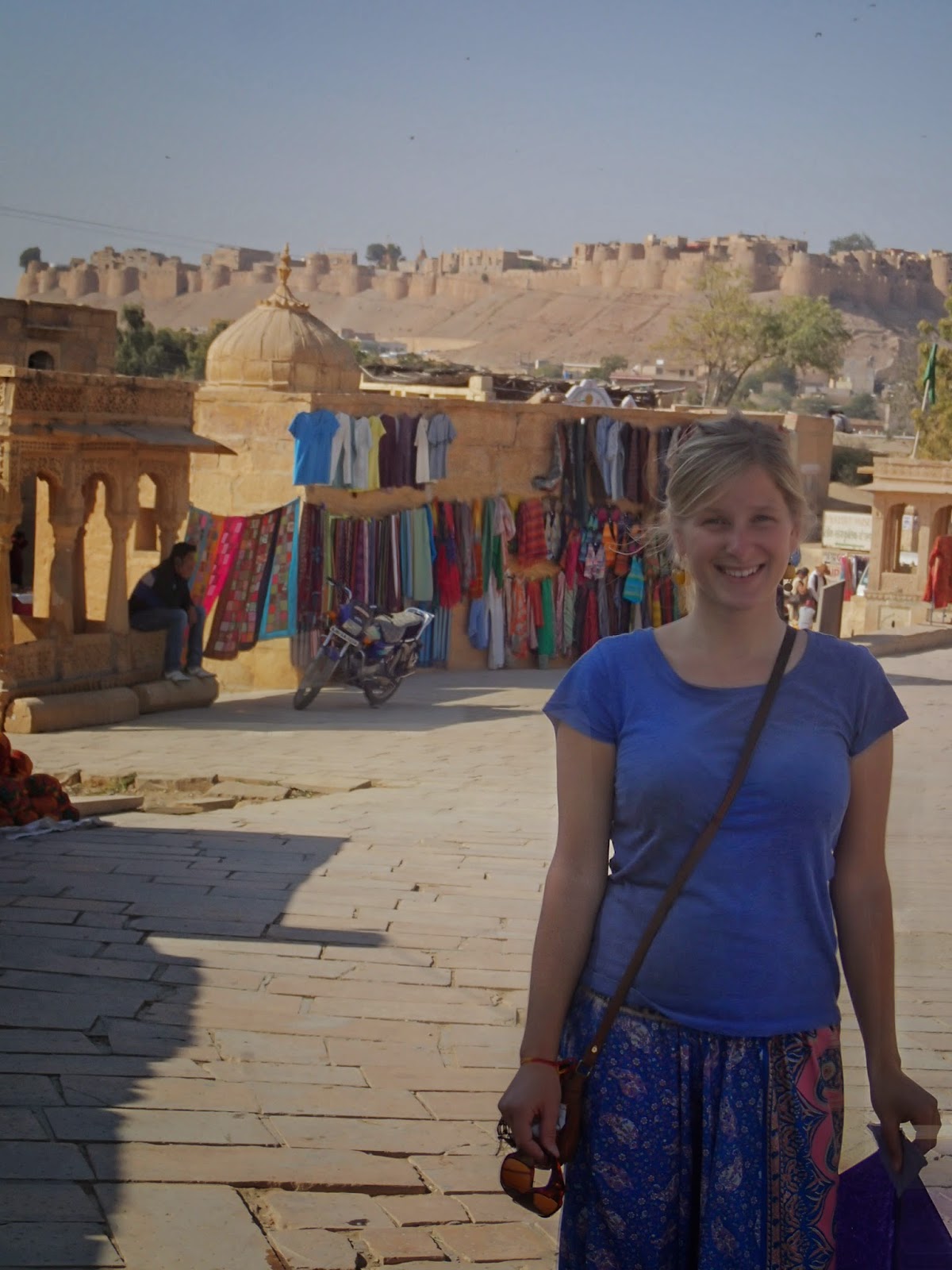 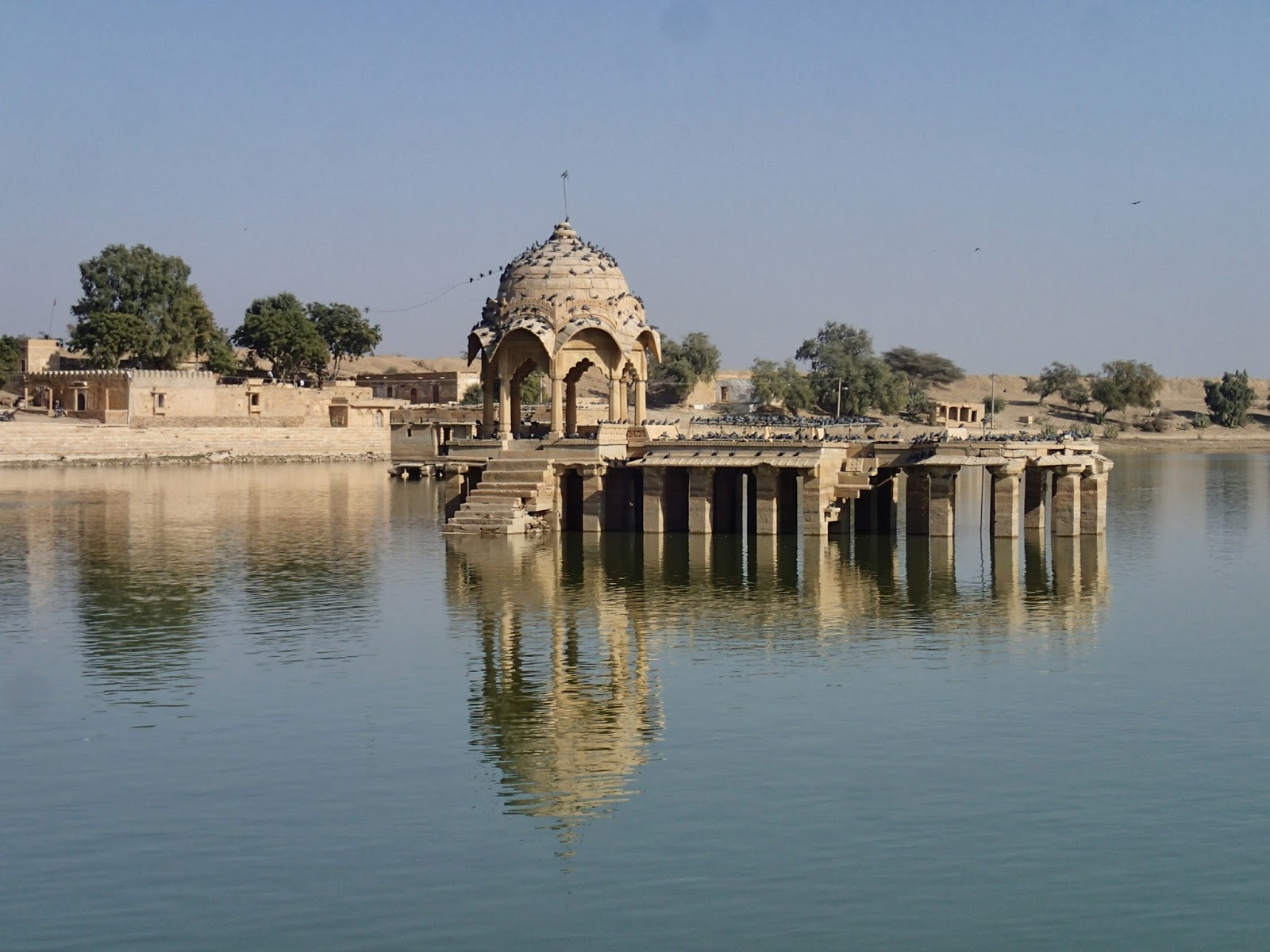 After great 3 days in this beautilful and very laid-back town, we jumped on a local bus to get to a little village right in the heart of the desert, where we stayed for another 3 nights in with the wonderful Badal and his family. 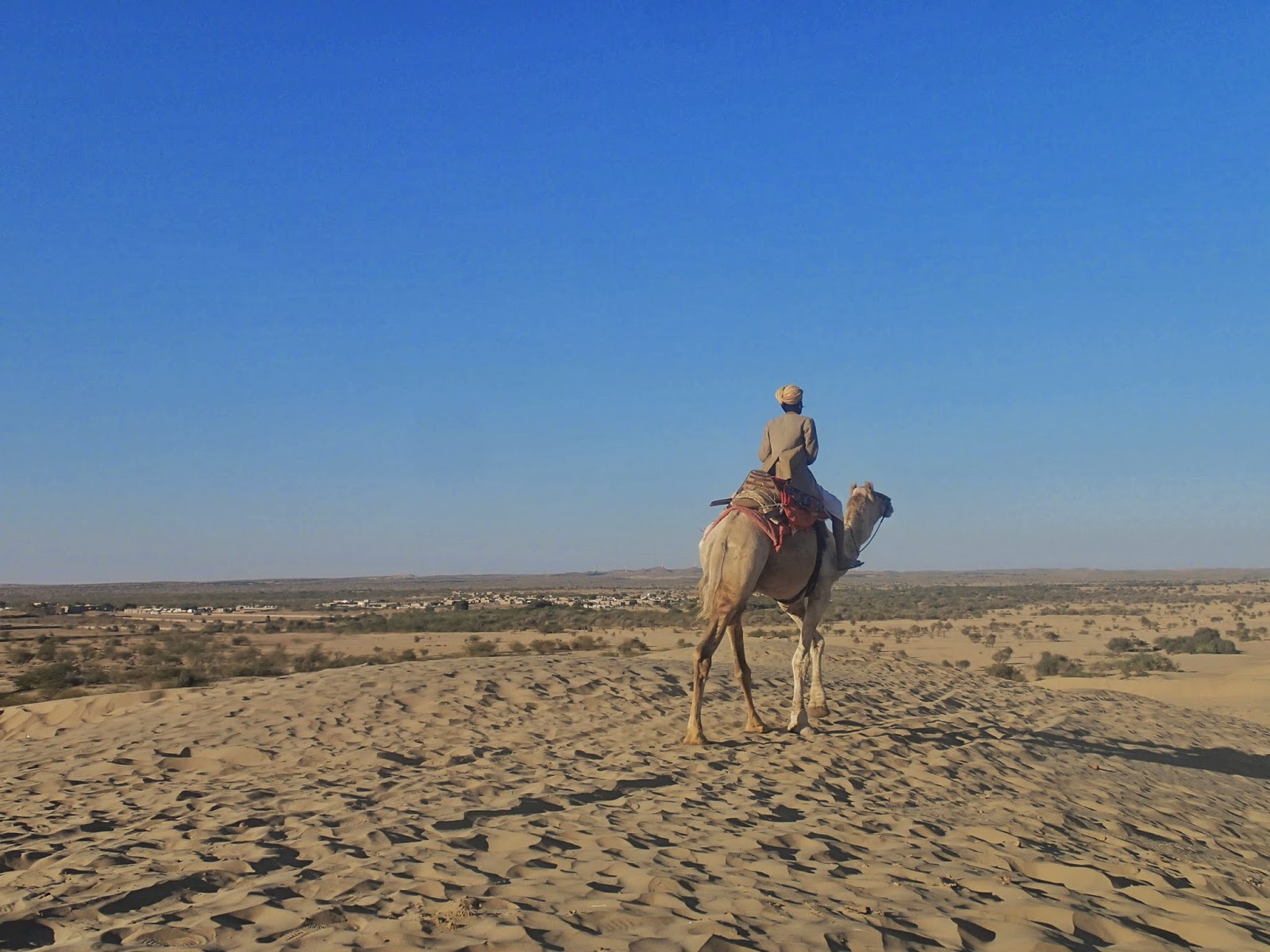 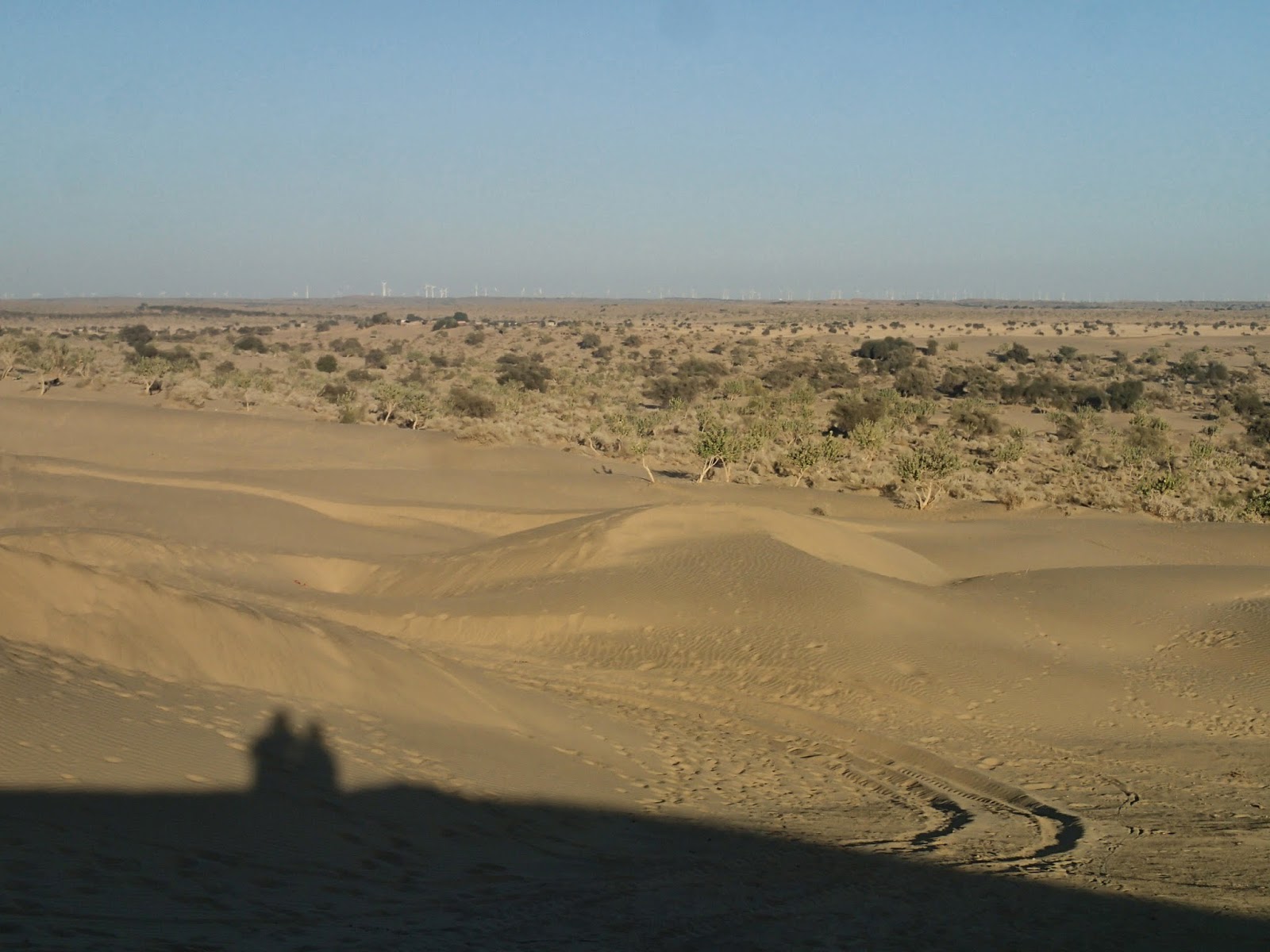 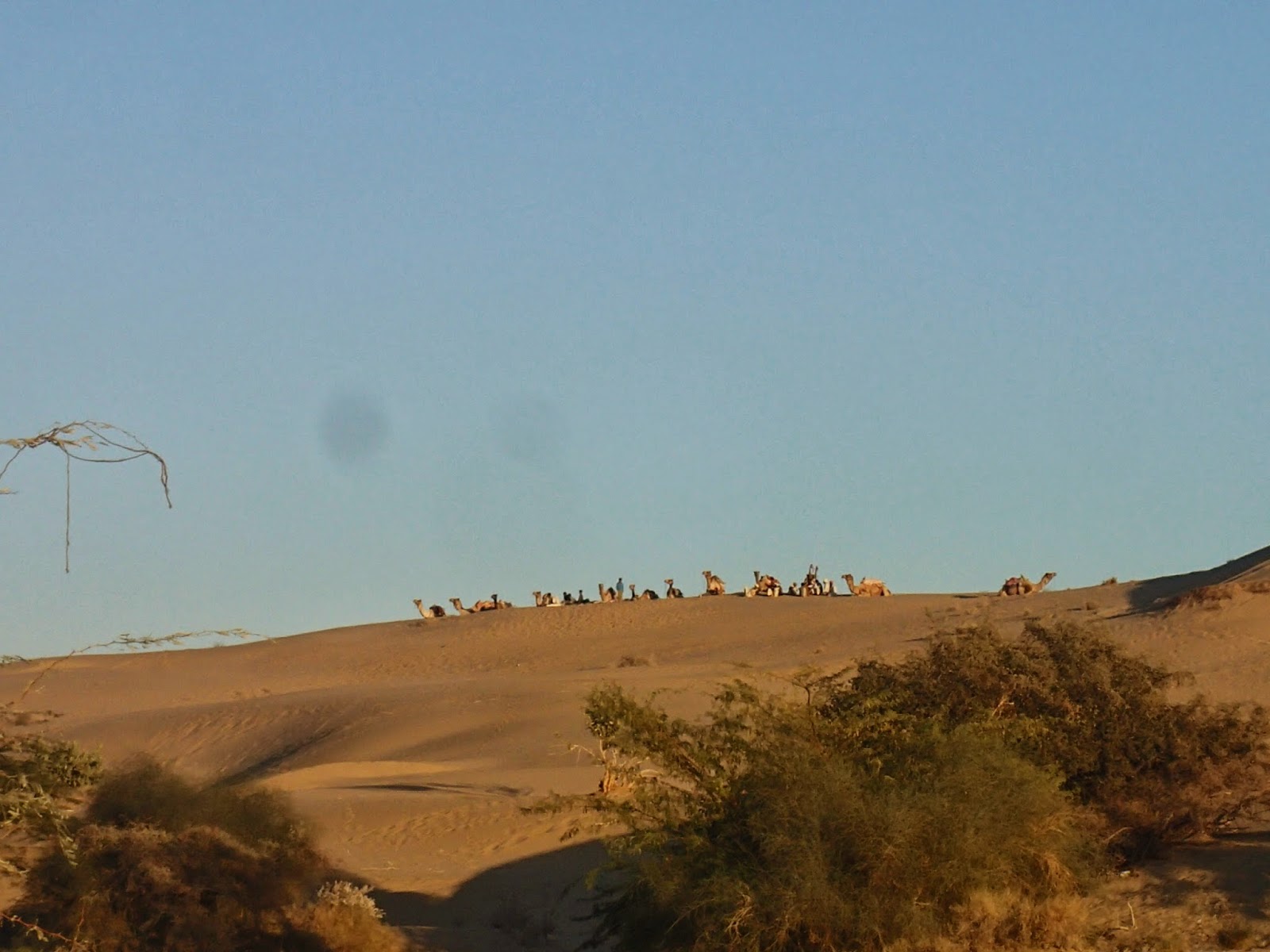 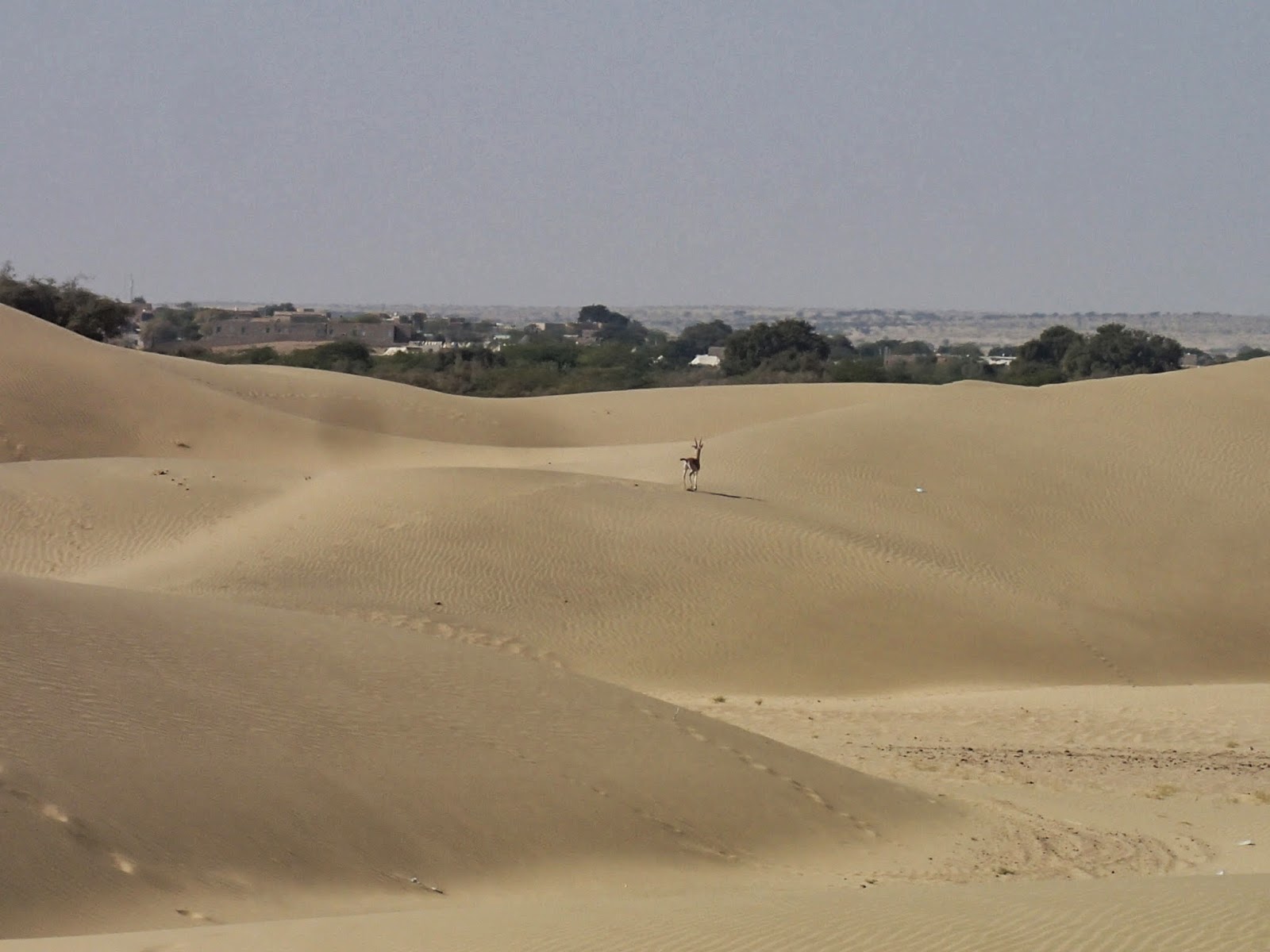 After another night in Jaiselmer, this time inside the fort, we headed to Jodhpur, the famed blue city. Our first impressions were not great and only improved once we had done the steep climb to the fortress and enjoyed the view down over the city. In contrast to the openess and vibrancy of Jaiselmer Fort, this fortress was a bit of a tourist trap, charging non-Indians a ridiculous amount and justifying it with added tack such as a Turban Musuem. Luckily we had come in the side entrance where there was no ticket booth and so enjoyed a free tour and the impressive view over the city. 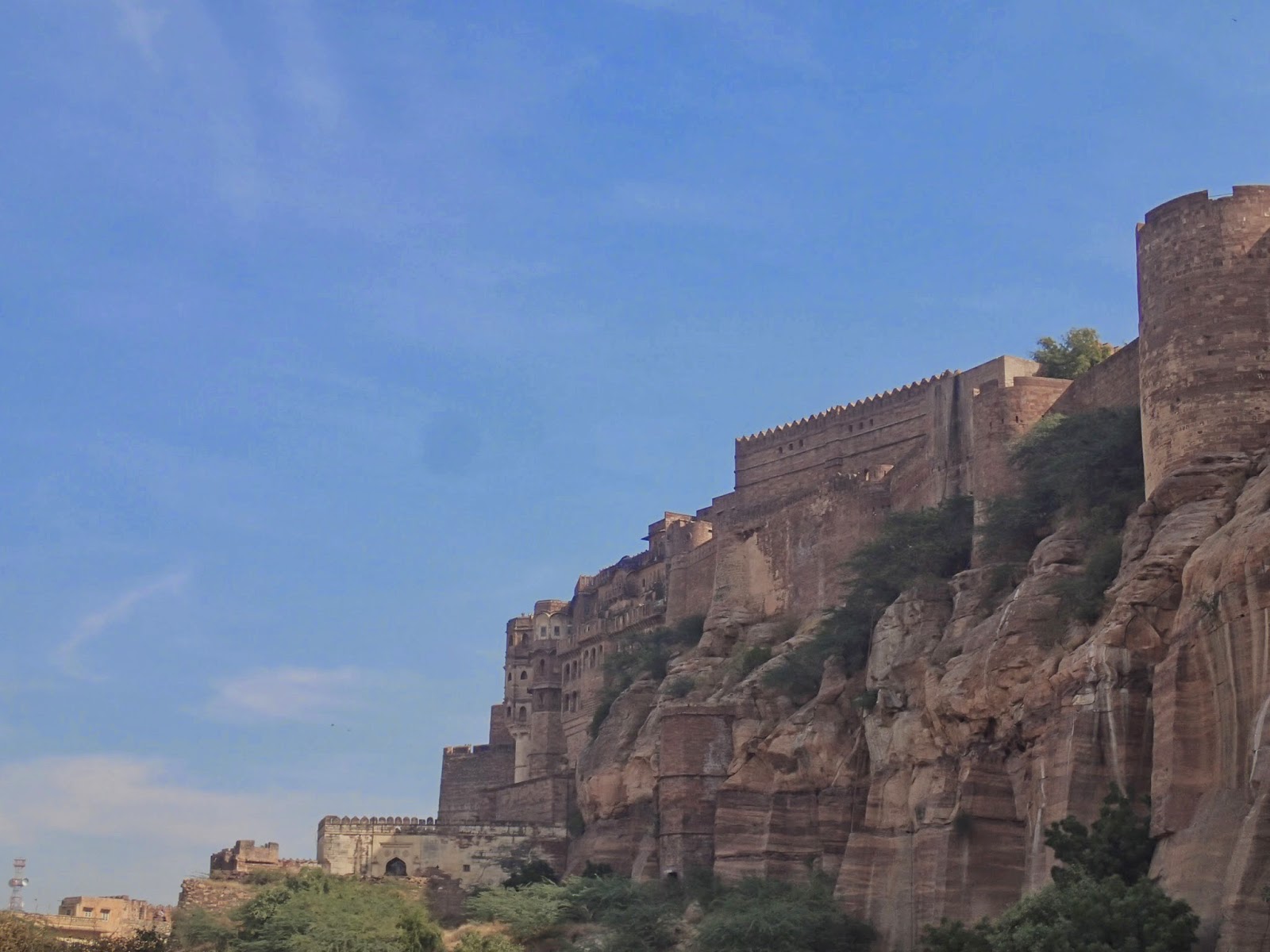 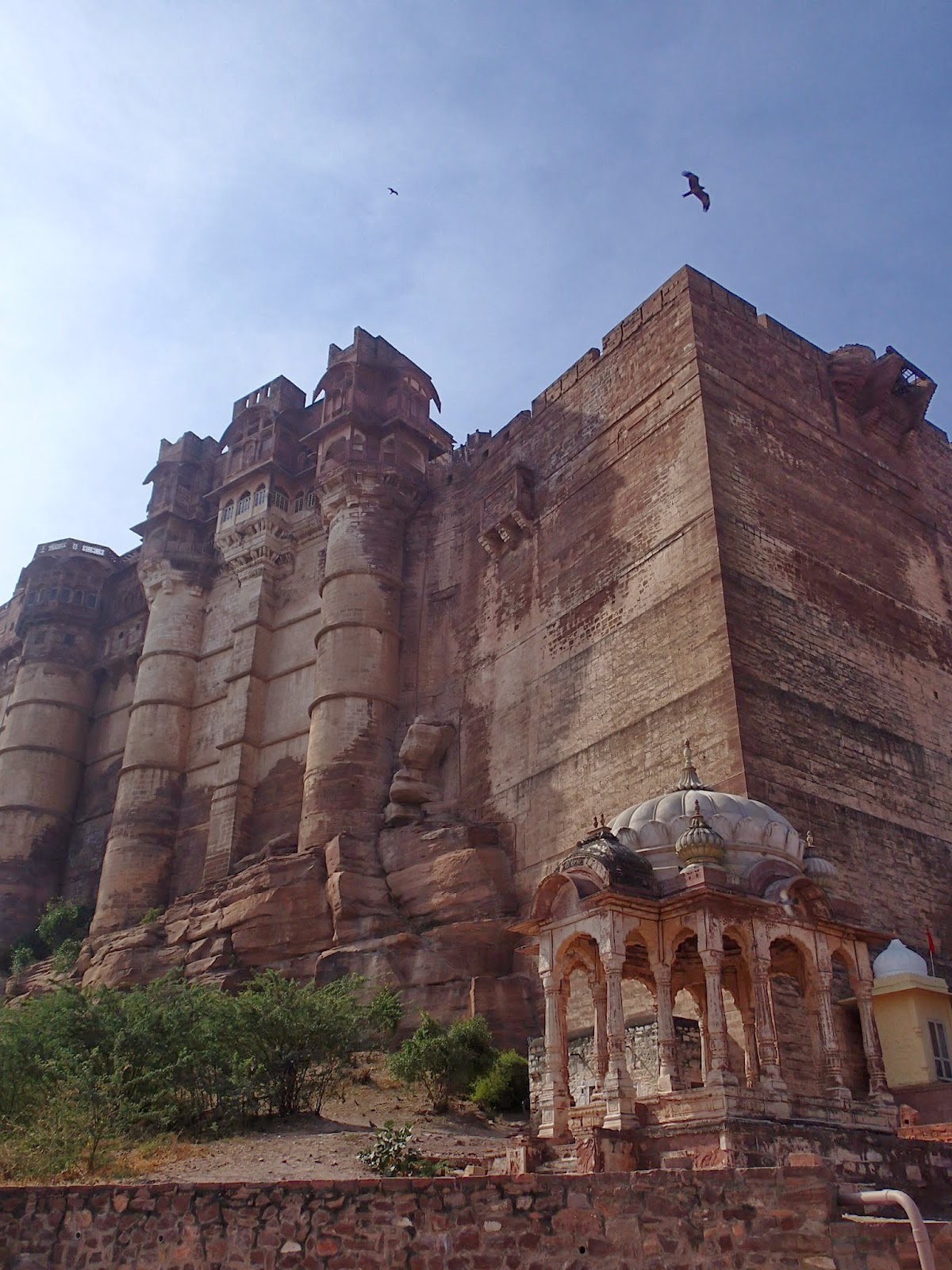 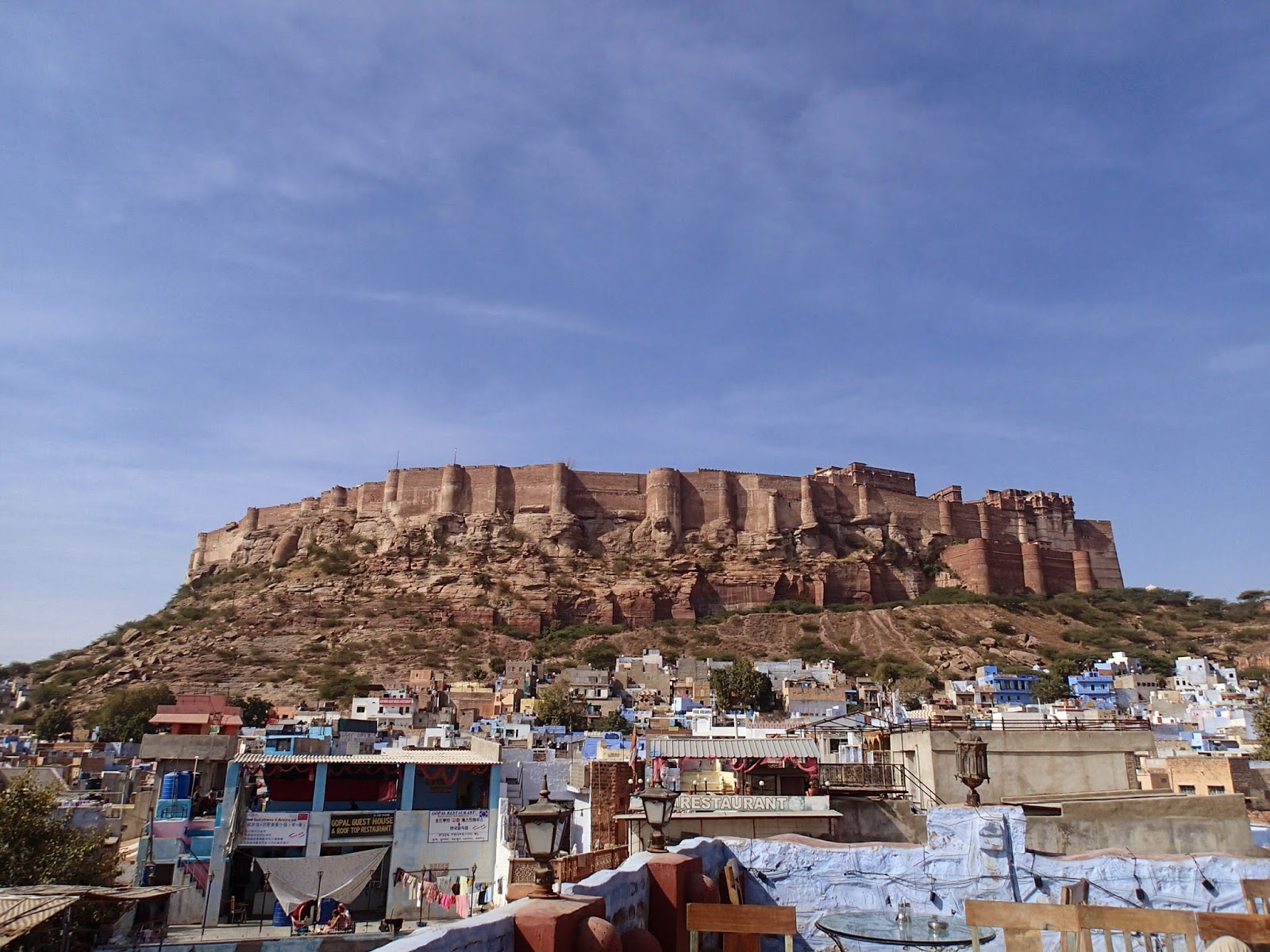 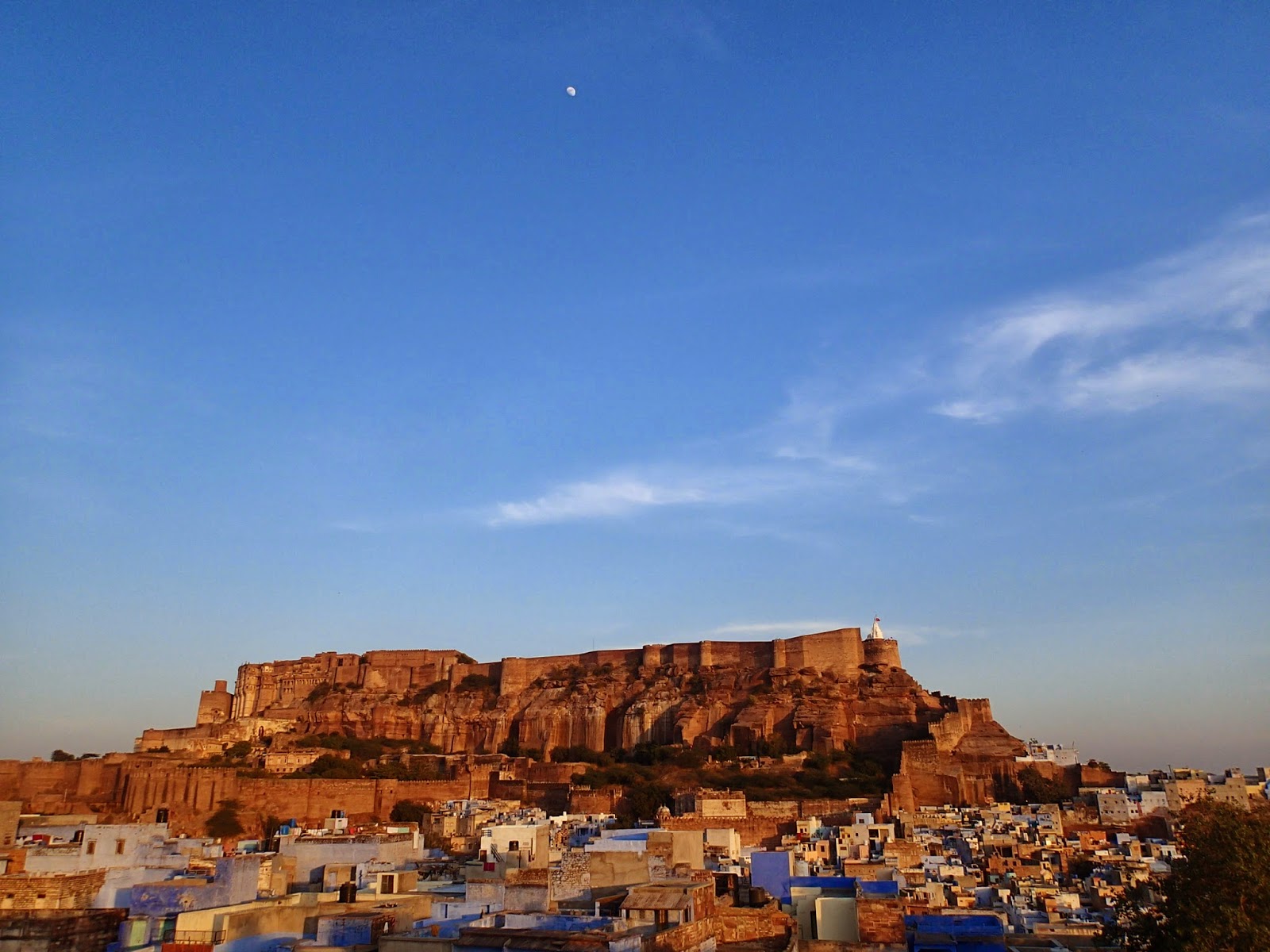 While in Jodhpur we'd heard there would be a kite festival in a few days and that a small pilgrimage town called Pushkar was a great place to enjoy it. Pushkar is a reverred site from many Hindus since it contains the only temple to Lord Brahma in the world and contains a Holy Lake, where the ashes of Mohatma Gandhi were scattered after his assisination in 1948. We headed with there and joined the thousands of others (mostly Indians, obviously!) who descended on the town for the religious festival. The streets were overflowing with pilgrims and Holy men. Huge woks, more than a metre across, with fires blazing beneath them were all over the town cooking and dispensing food free for all the pilgrims and curious tourists :) The Holy Lake was shielded from the hectic main street only 50m away by a ring of bathing ghats, which looked effectively like townhouses and were used by royalty while bathing at the lake.


Not wanting to intrude, we found a spot beside a quiet ghat and sat overlooking the lake, fully immersed in the tranquility around us. The whole scene had a magical, harmonious atmosphere. Even the pigeons seemed to behave with an amazing elegence, the large flock rising as one from its collective resting point in front of a ghat, the beating wings of hundreds of birds passing just above our heads stirring the air and dappling the sunlight. They passed us in a moment and continued around the outskirts of the lake, completing a circuit before settling once more. The birds performed this ritual every few minutes as if collecting the rising prayers of the pilgrims. After sitting a while entranced by the magical atmosphere we gingerly approached the water and cupping the water in our hands, washed ourselves in the lake.
The festival culminated in a single hour towards sunset when people flew kites from every roof in the town and sent burning Chinese Lanterns up into the sky, while some of the guesthouses also let off fireworks and covered the town with music from loadspeakers. Although we'd forgotten to actually buy kites, so many had their strings cut by other kites that simply standing on a rooftop for 5mins would land you a nice new kite... all you needed was plenty of spare string! 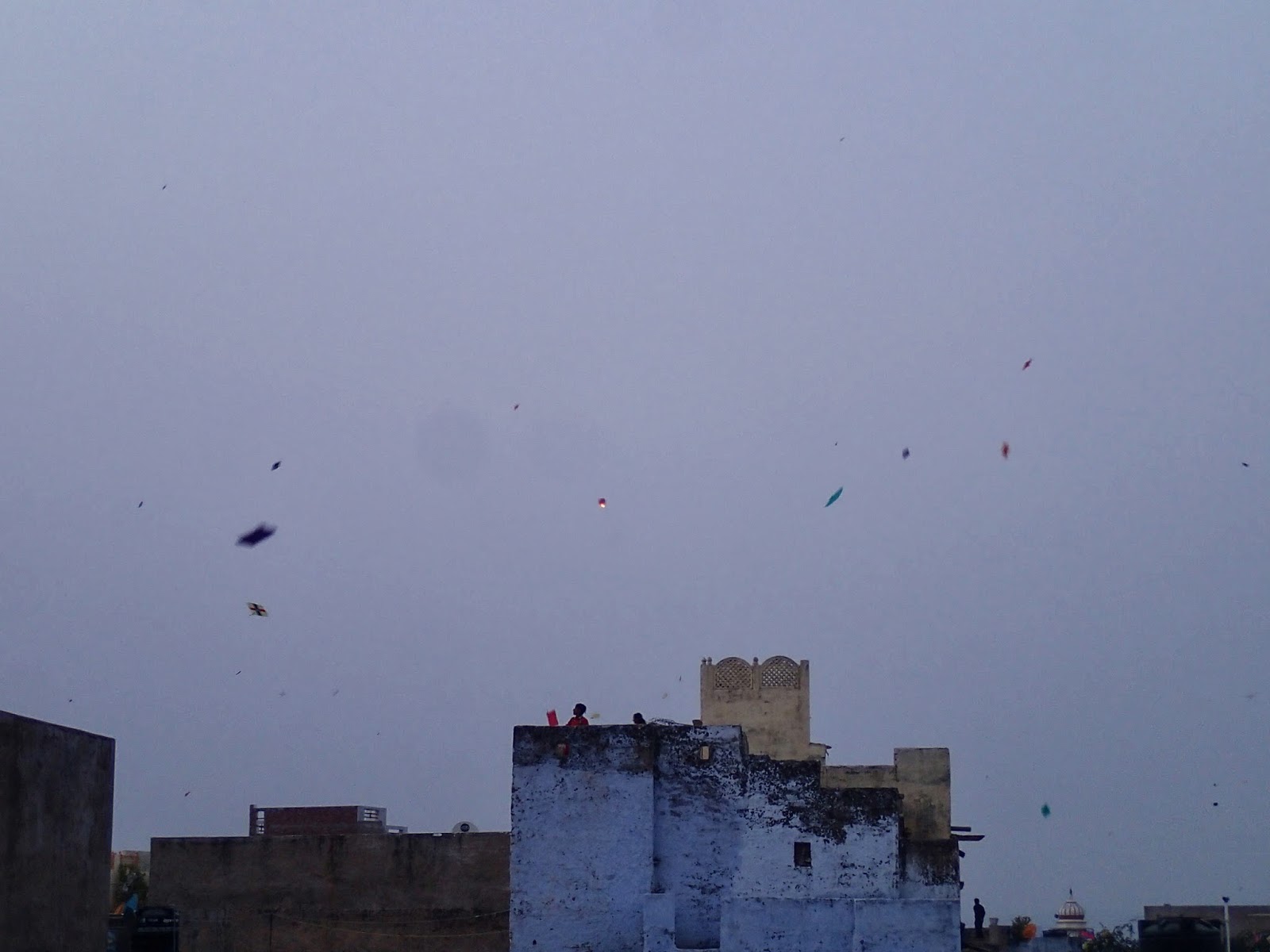 After enjoying a week in Pushkar, we moved further south to the Udaipur, dubbed the most romantic city in Rajasthan. It also was the set for the James Bond movie, Octopussy. The undoubted highlight of the city was the evening show in the local musuem that had a large group of dancers demonstrating the different types of dance from all over Rajasthan and even included a few hilarious routines with dancing puppets!! :) 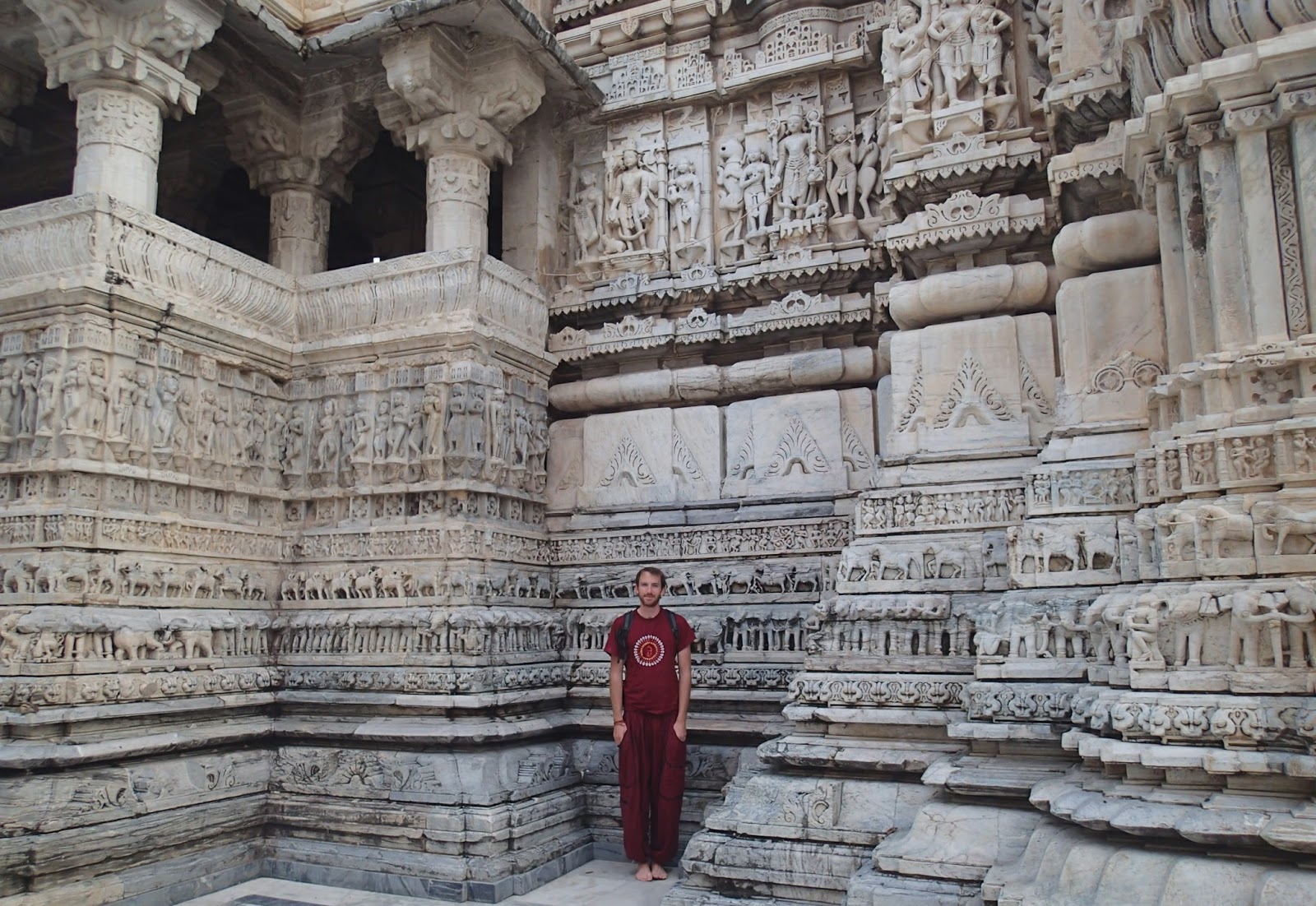 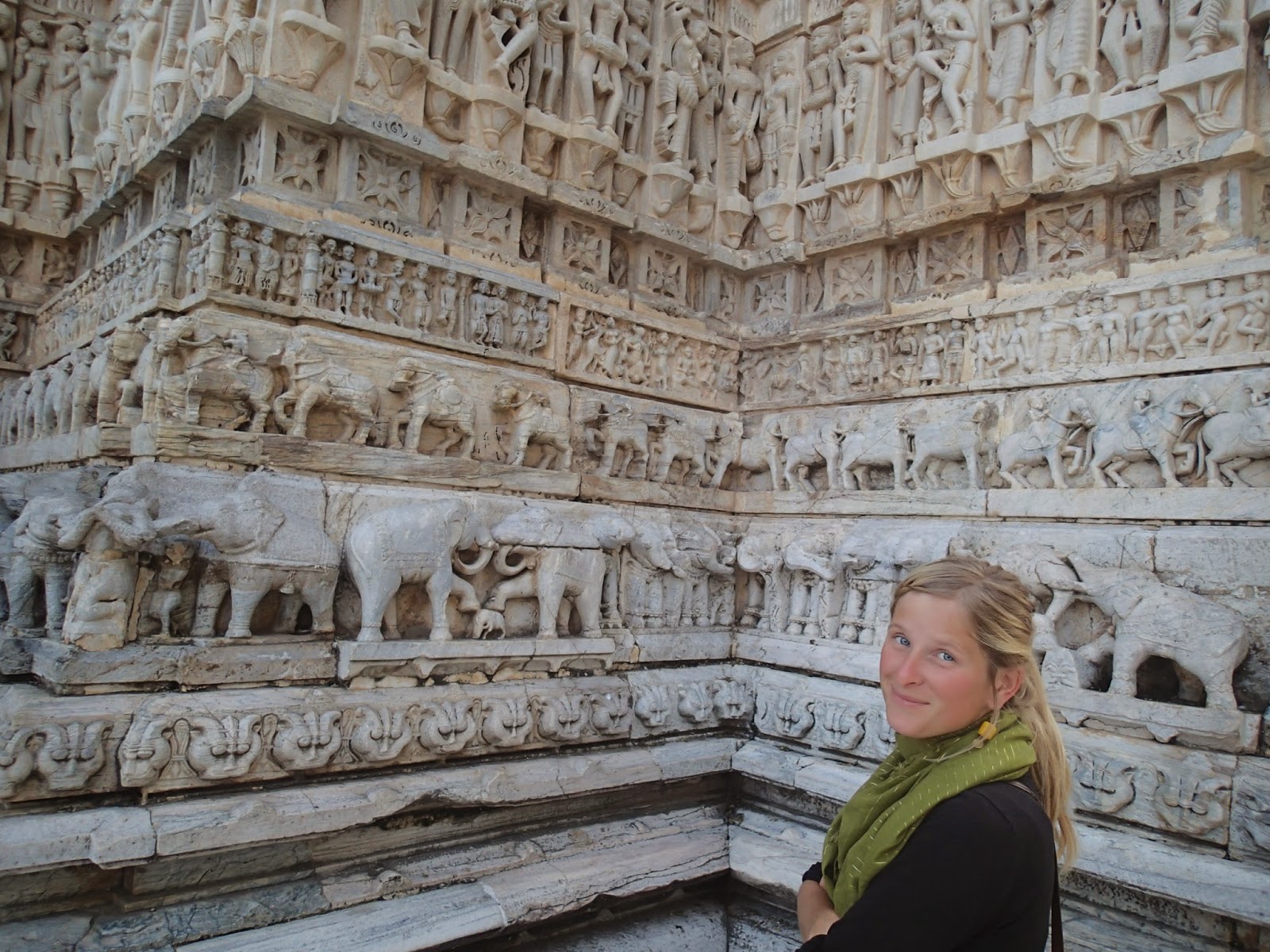 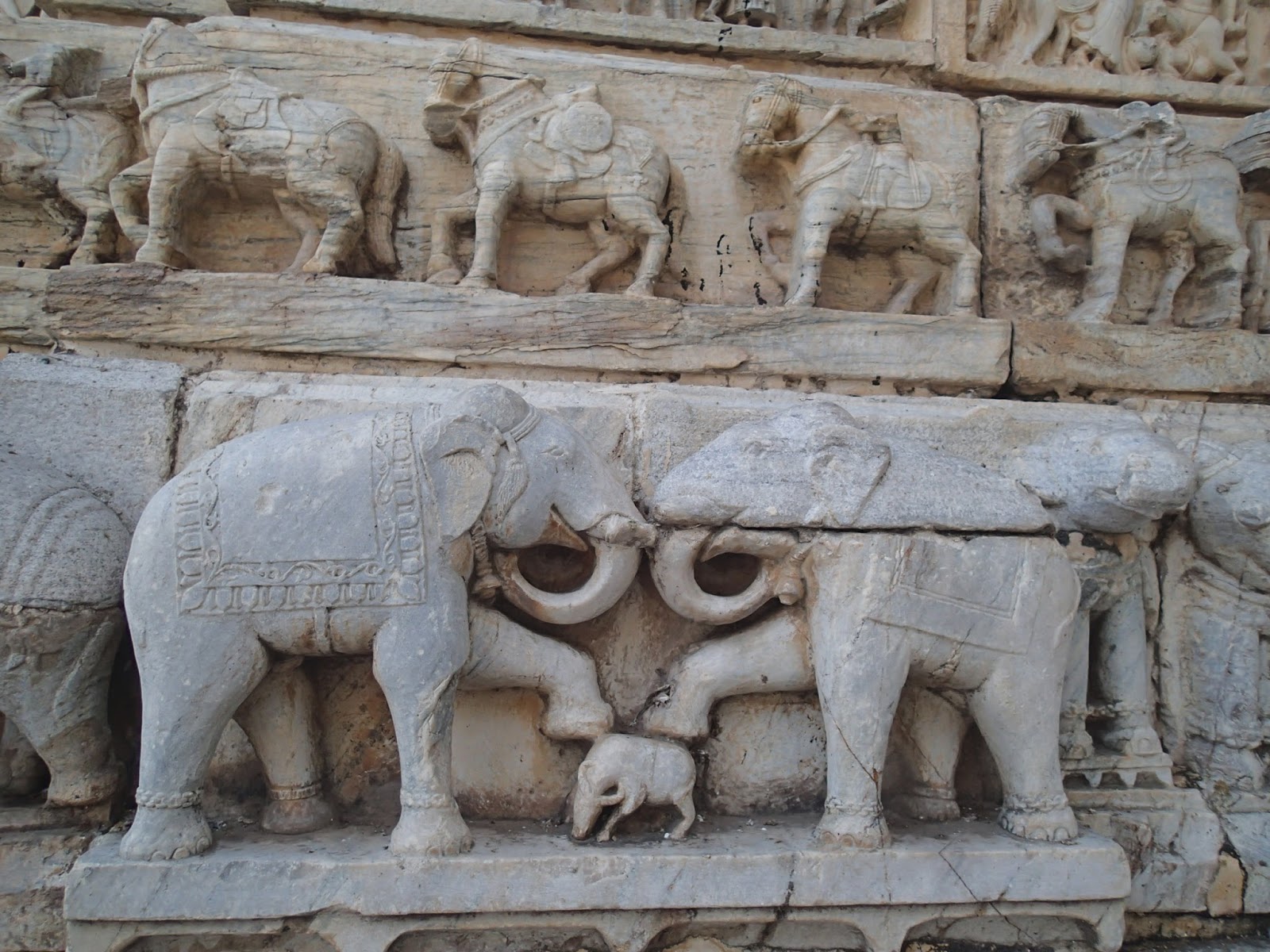 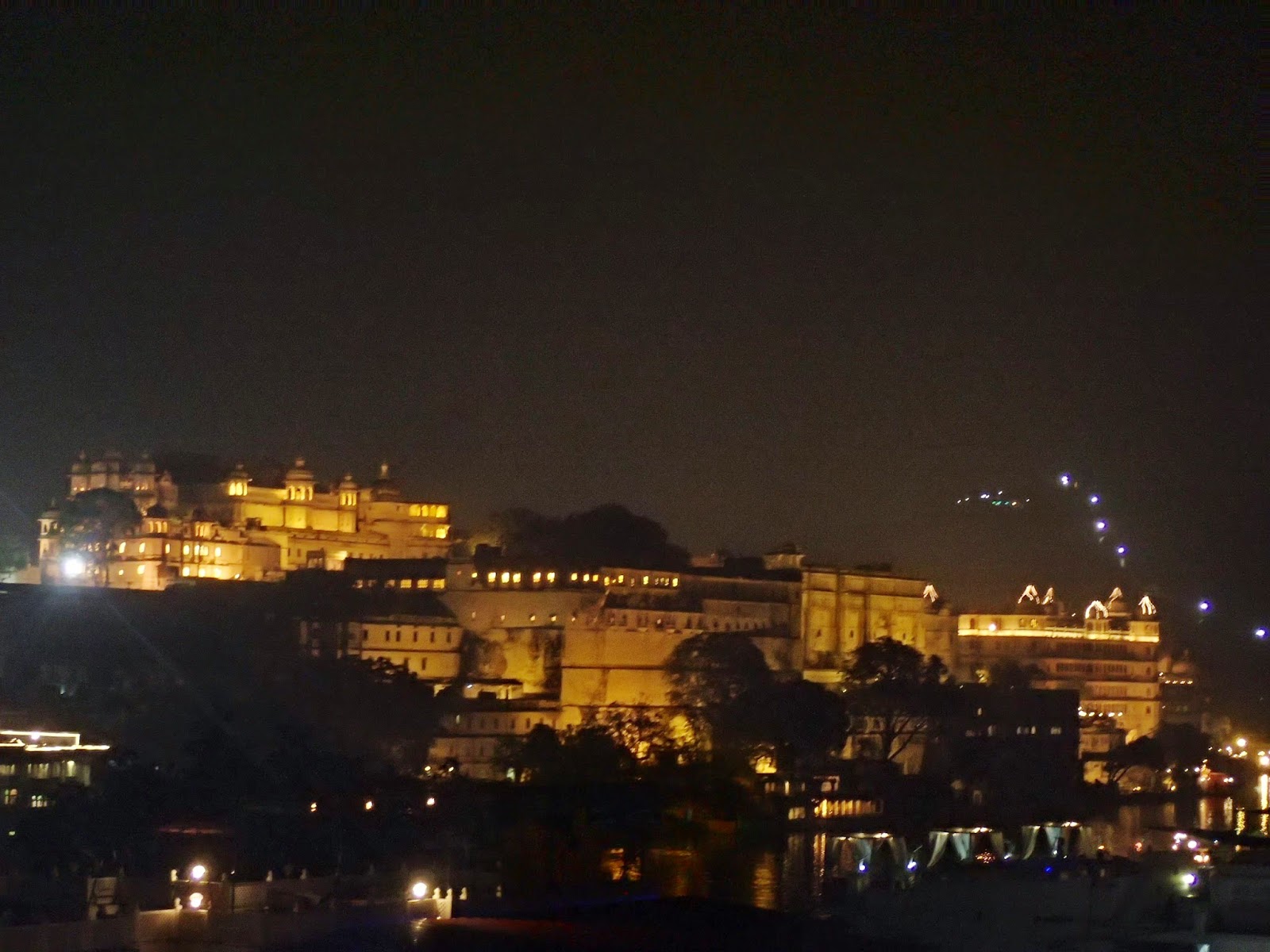 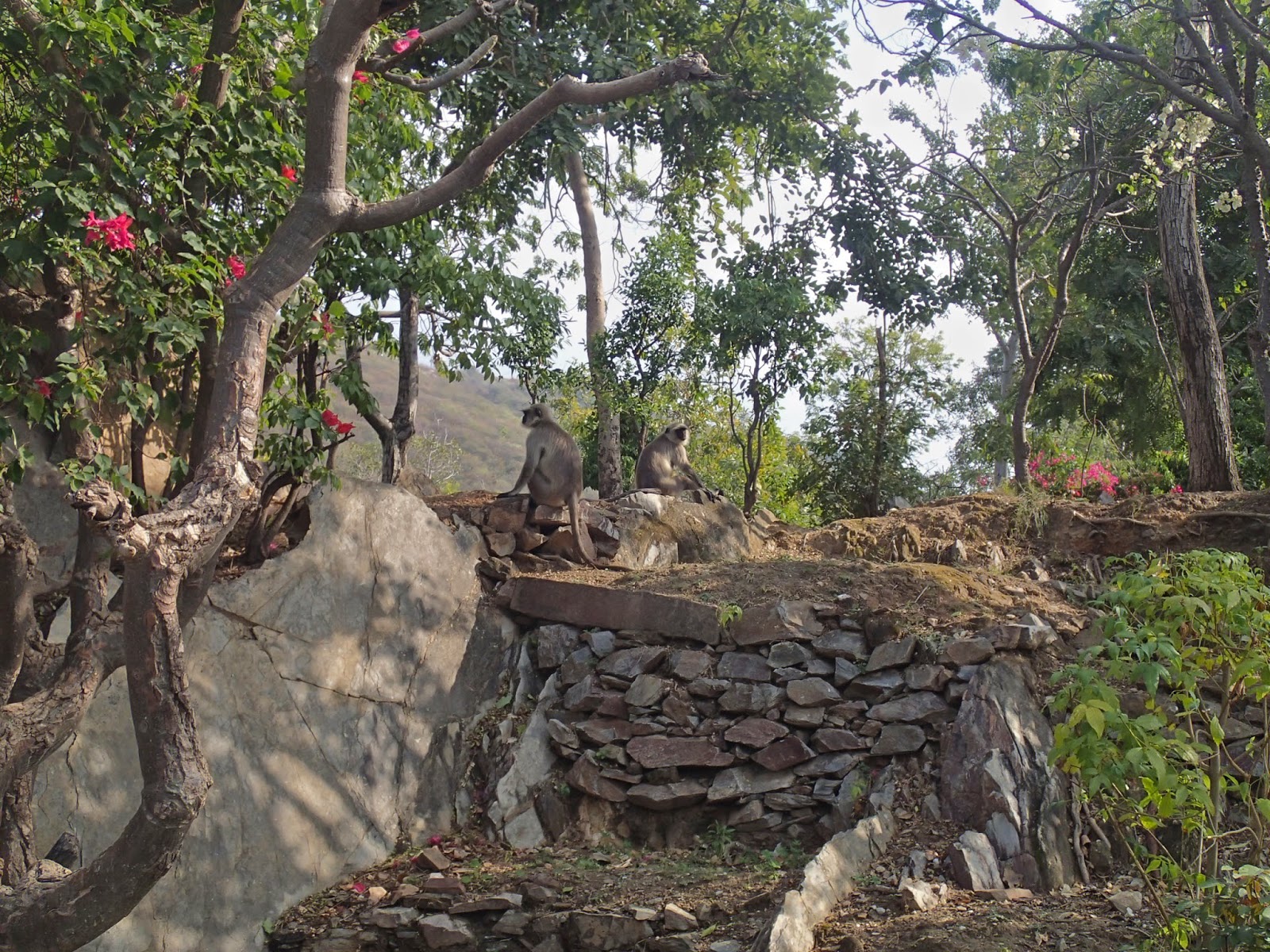 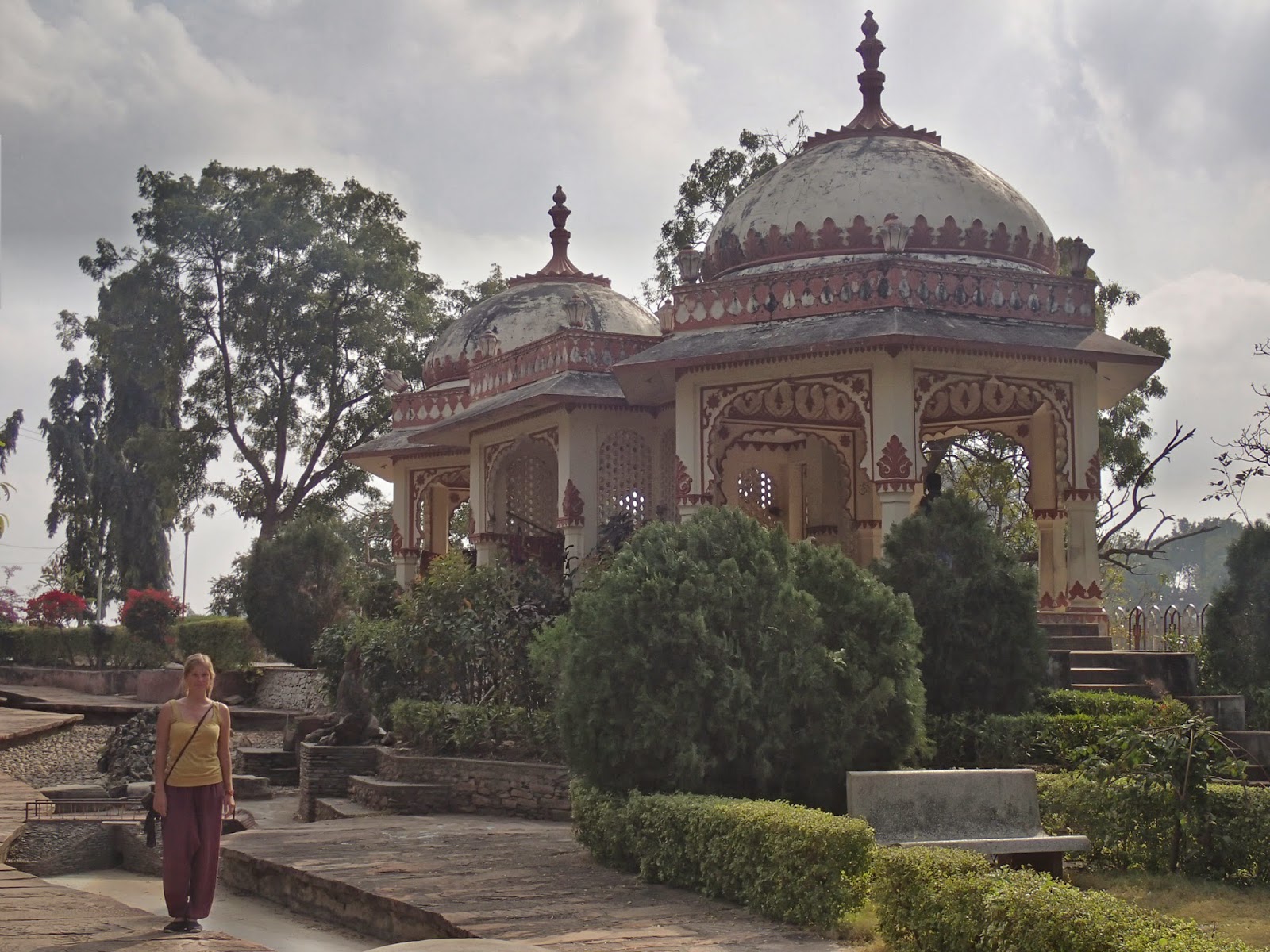 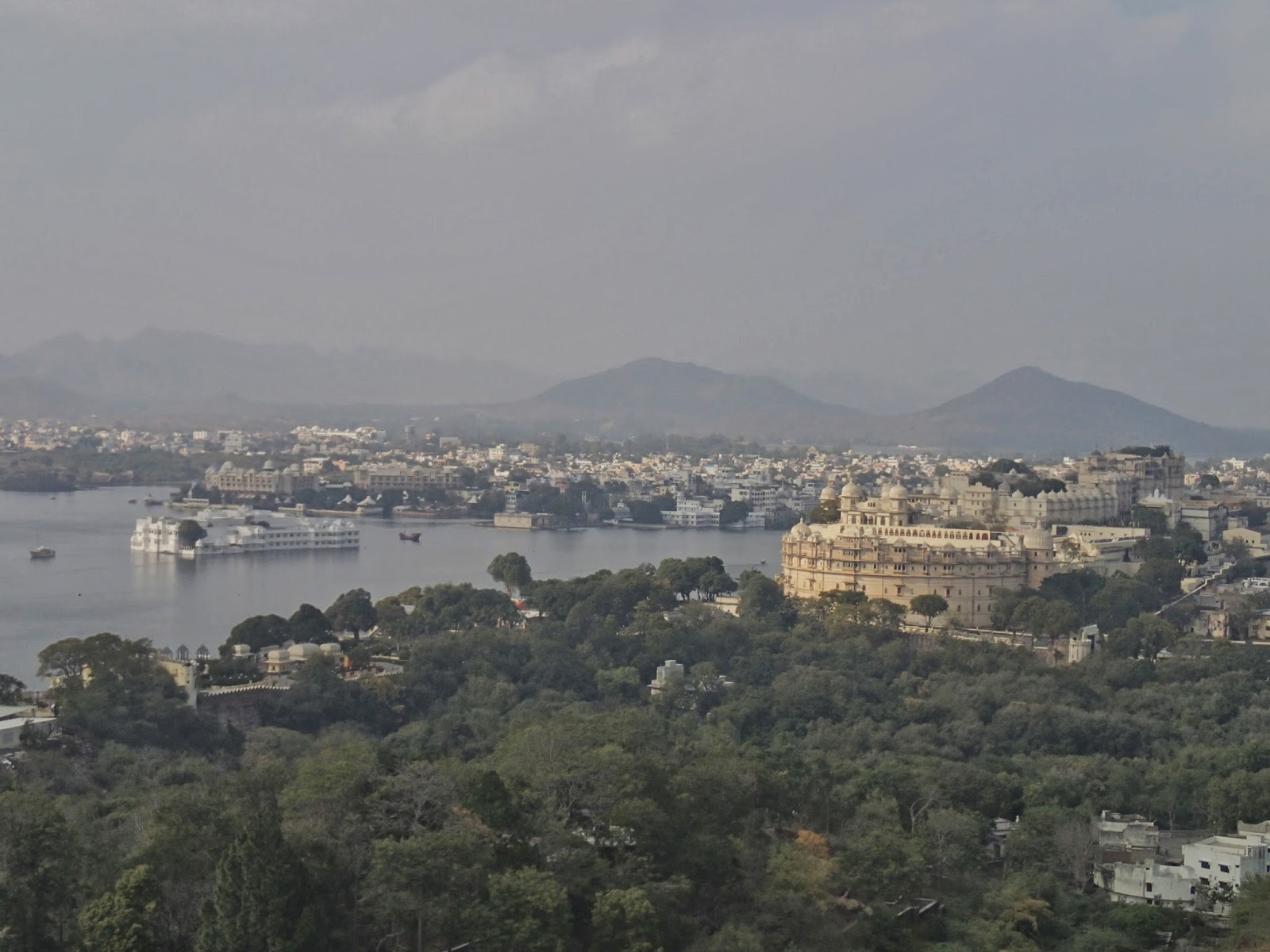 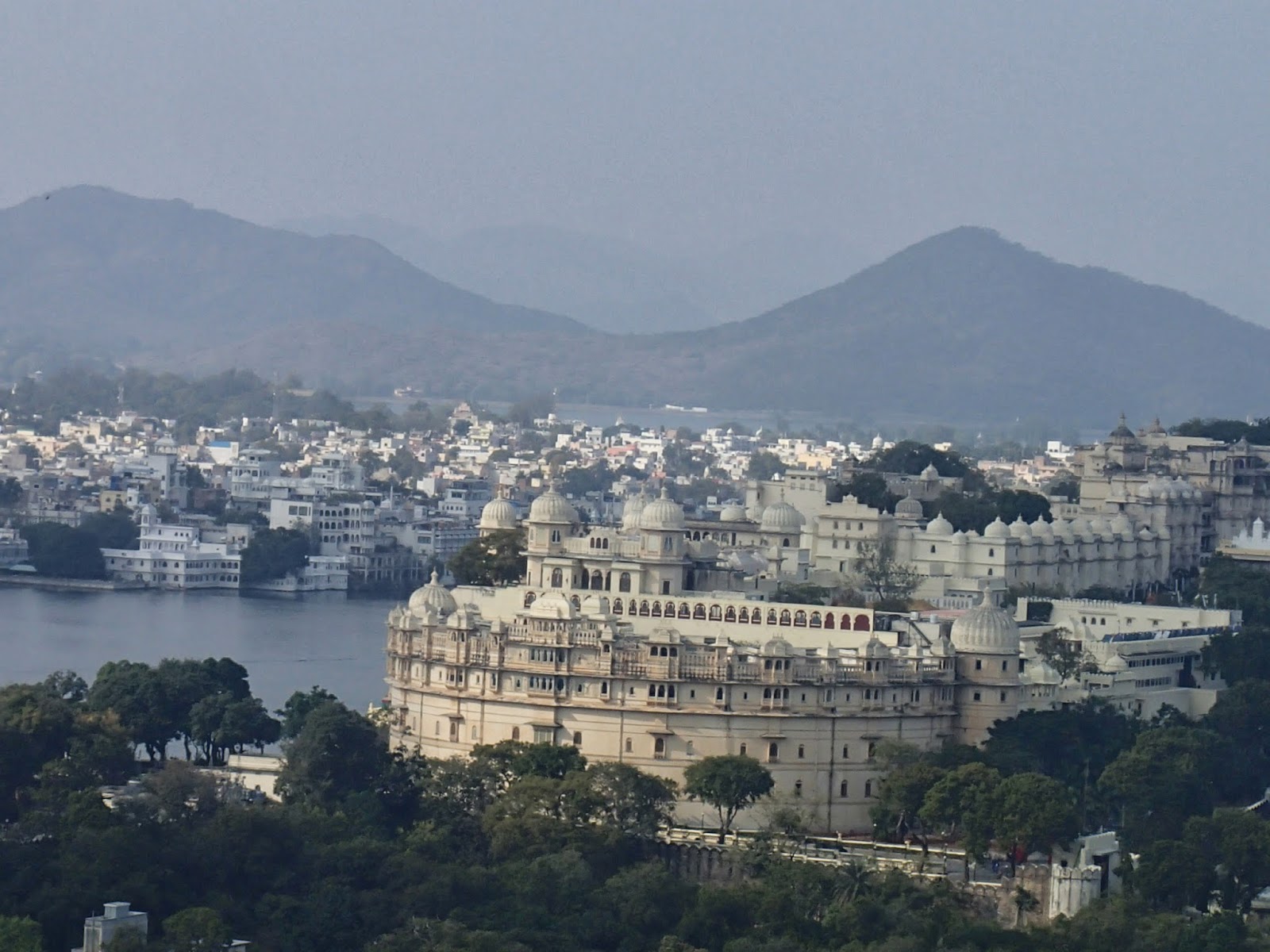 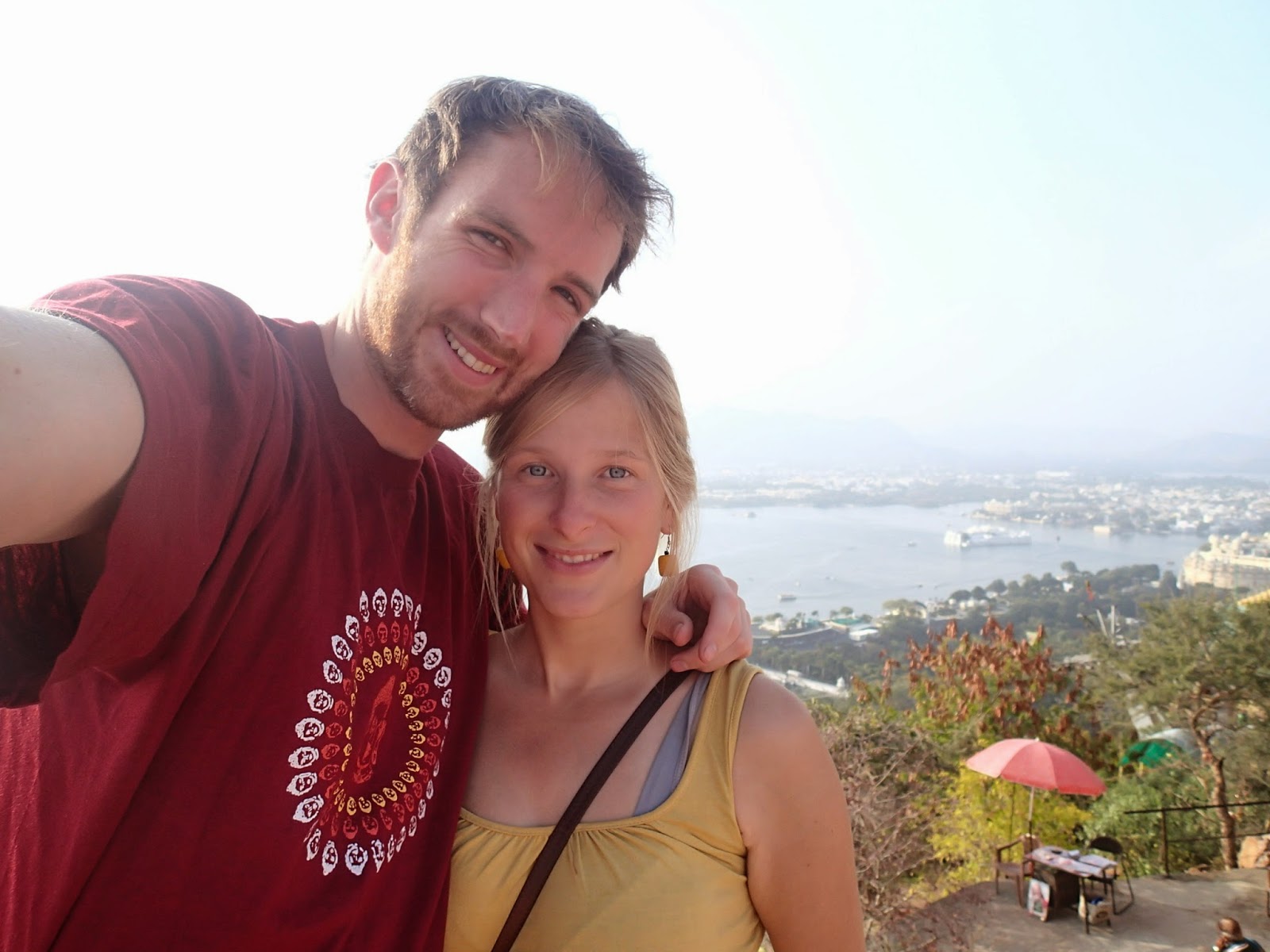 After a few days we made a quick visit to to Bundi to check out the local castle, which was taken over by monkeys after the previous owners left. We spent a day rambling around the castle ruins, after which we'd a nice homecooked meal around a campfire in the old elephant stables. After that we got the night train back through Udaipur, to Mount Abu, which was our final stop in Rajasthan. Mount Abu is known as a honeymoon resort and is not so often visited by foreign tourists, but dropped by for a few days to enjoy the beautiful scenery around the mountain lake. 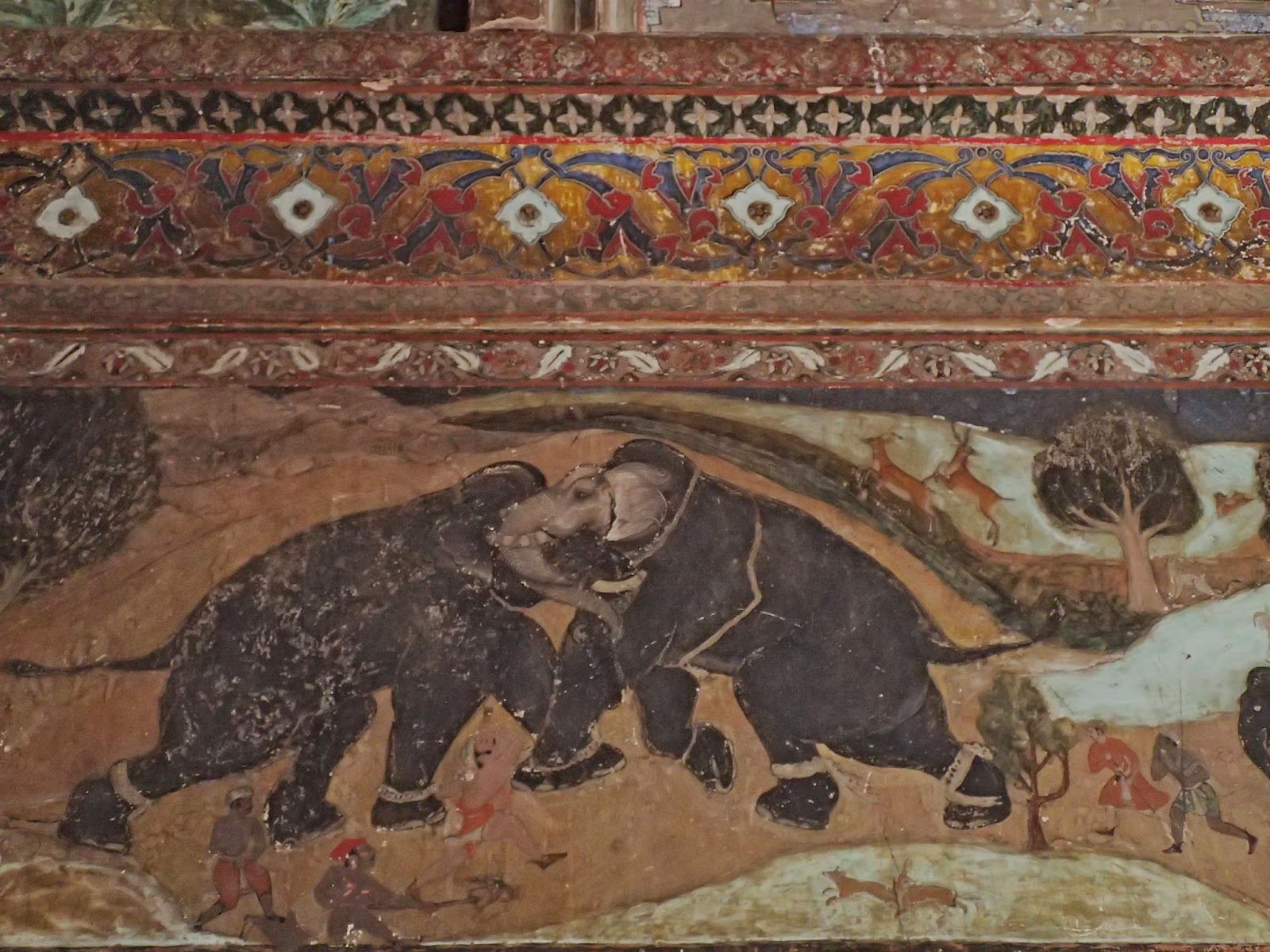 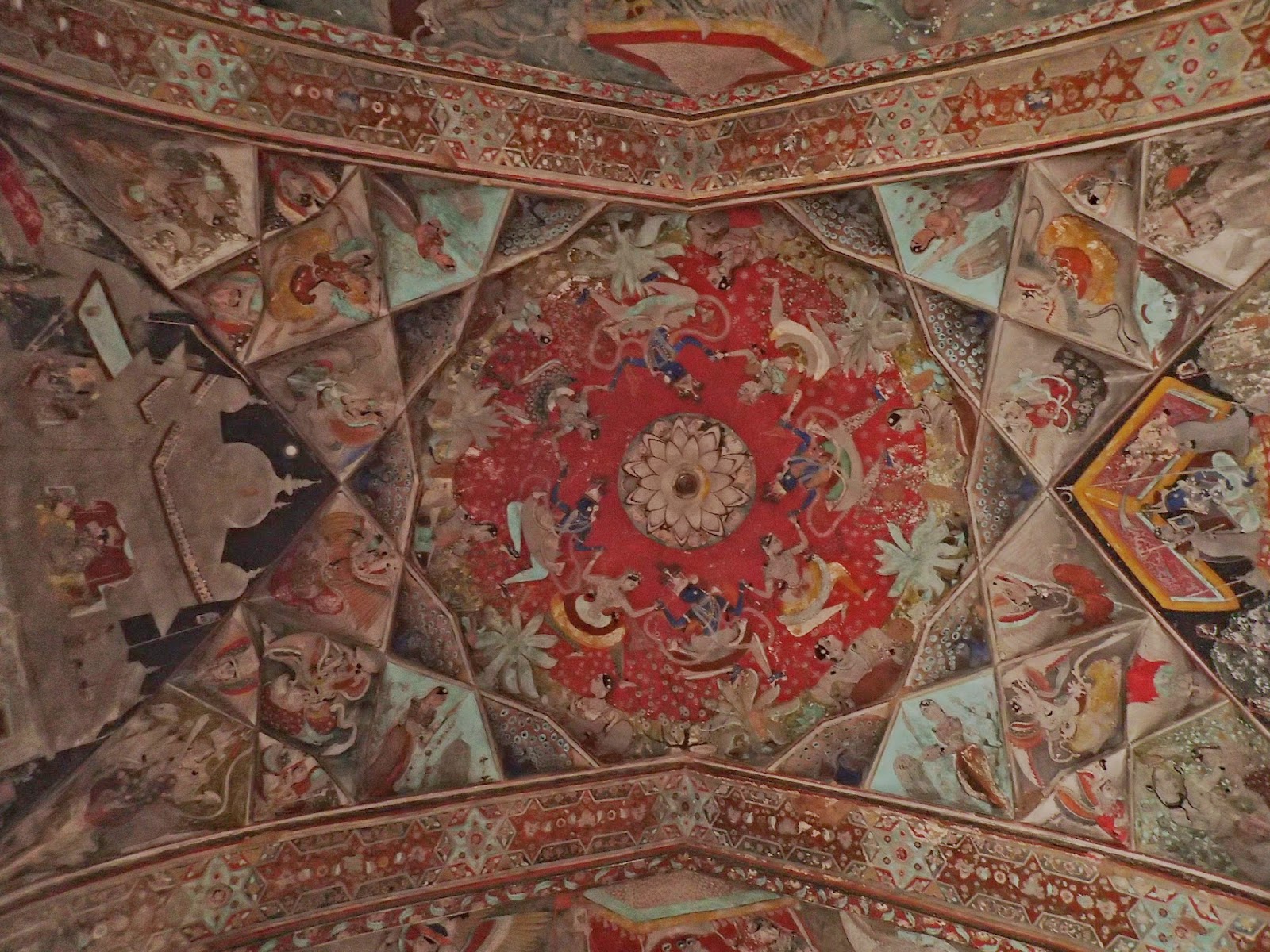 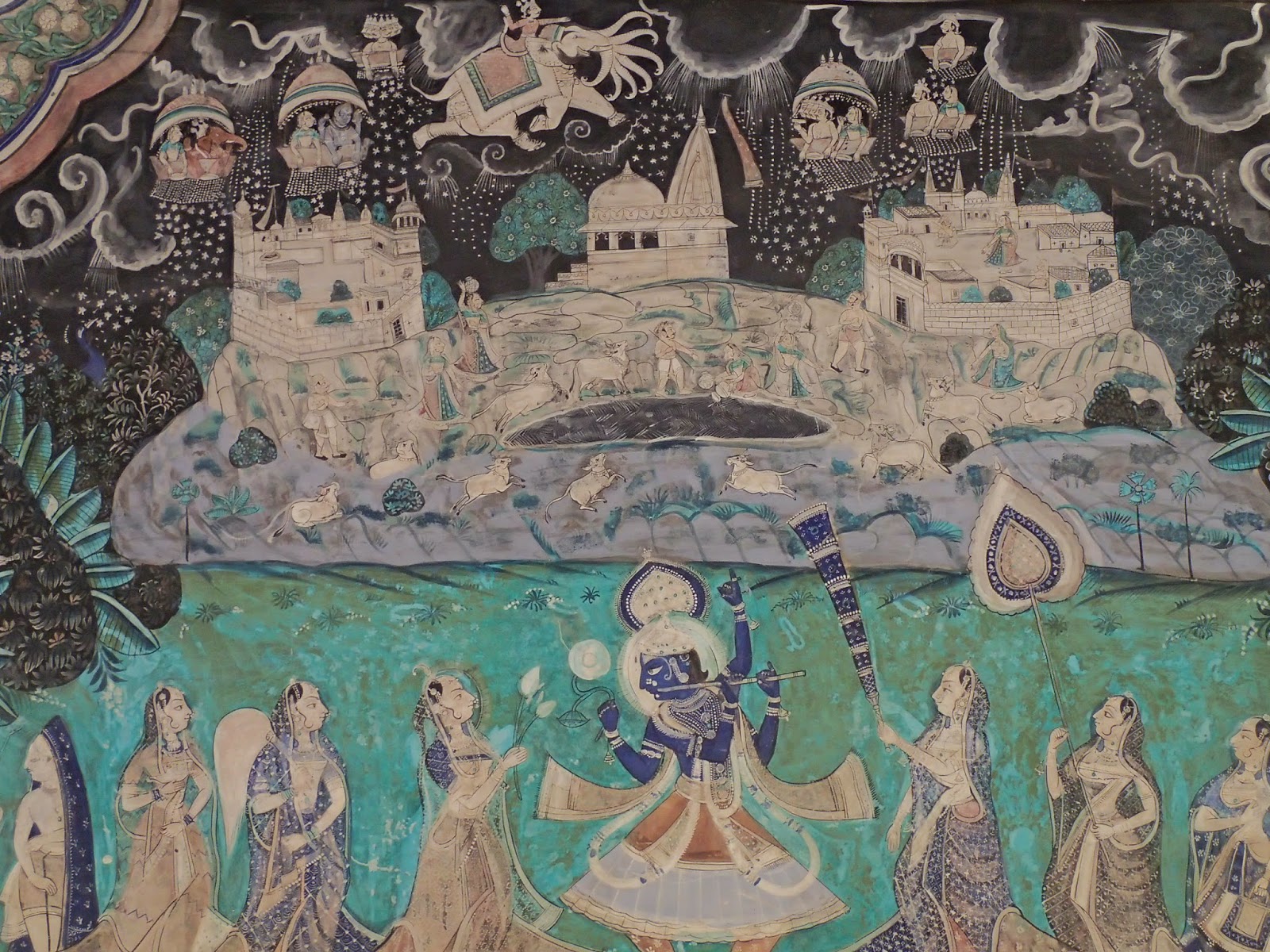 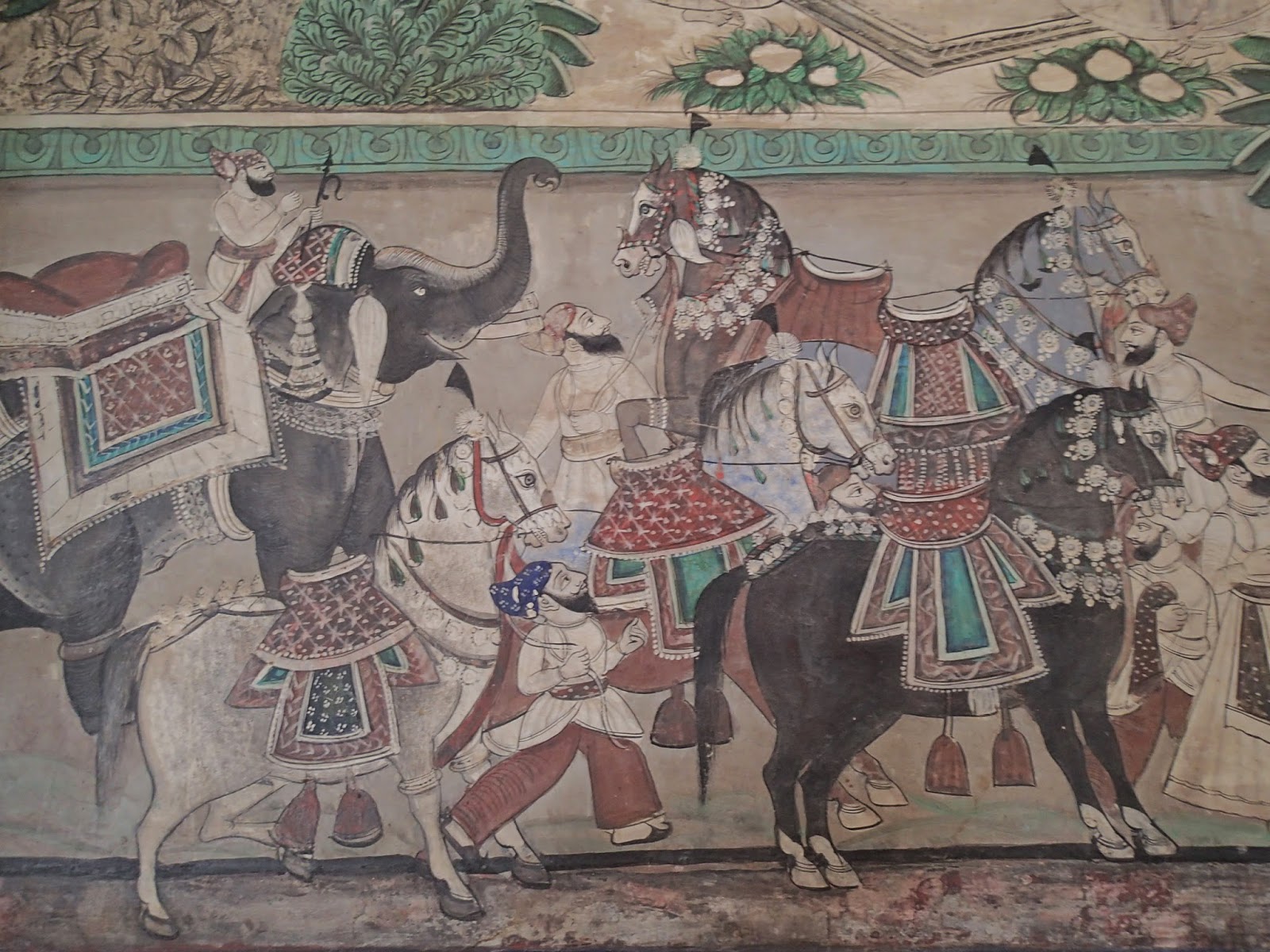 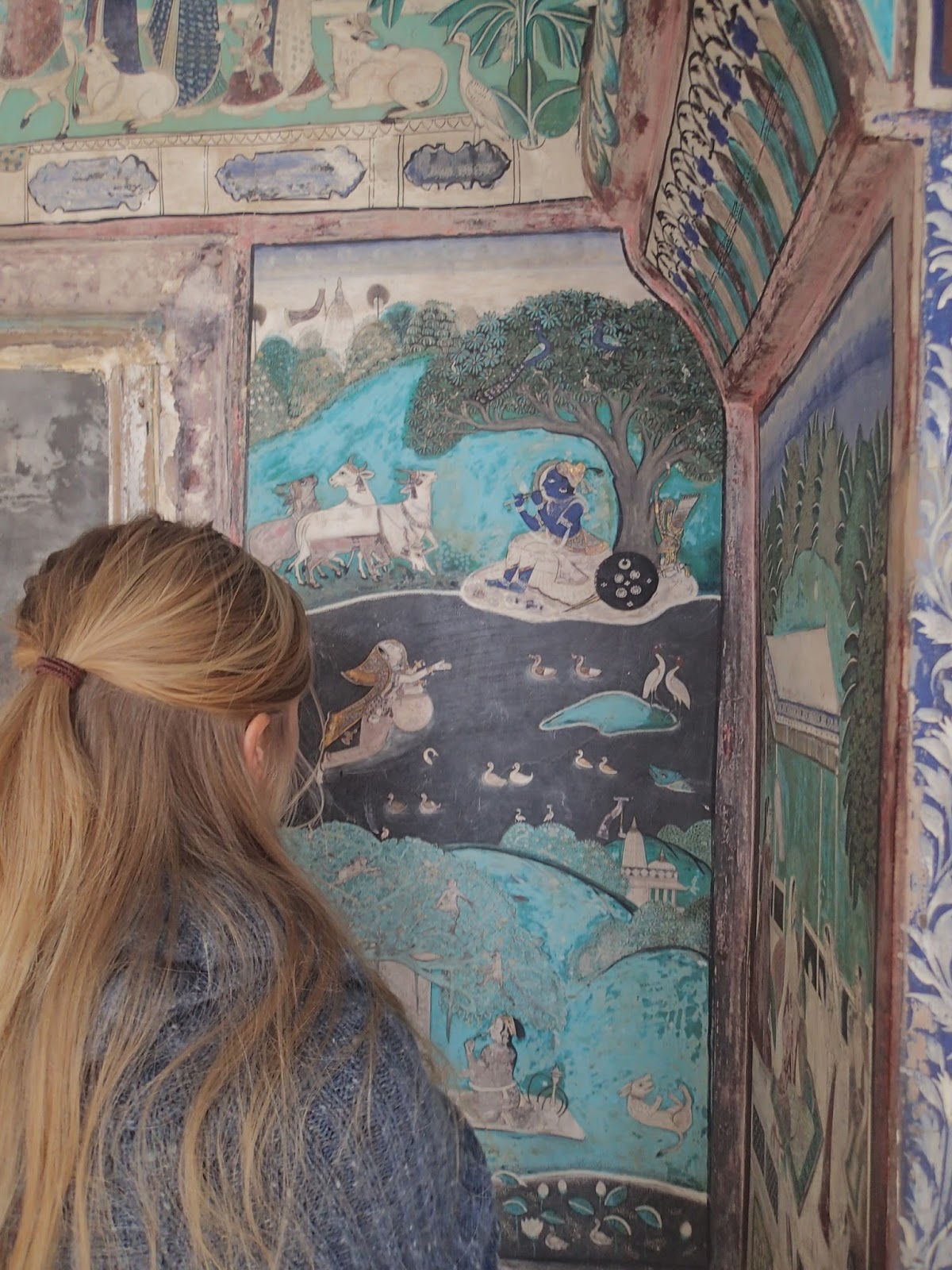 At this stage we had spent 6 weeks travelling one corner of India, without having visited the one place we were certain we didn't want to miss. And so from Mount Abu we jumped on a train brought us straight to Hampi, the old ruined capital of the Hindu Empire. The train covered ~1500km in 36 hours, a distance that took us around 2months in our canoe! We had finally landed in the Mekka of bouldering and one of the main stops on our world tour...

Posted by Colin and Andrea at 11:05 No comments: